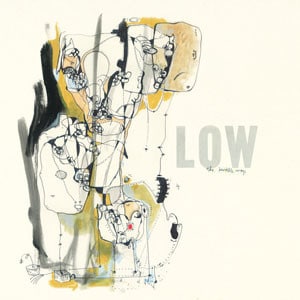 Few bands have been quite as consistent and satisfying over such a long time as Low. For unwavering admirers who simply wish for dogged persistence, the signature elements of Low’s sound have now remained intact over decades, to the extent that new music is easily recognisable as their work. For those seeking development and progression, recent new releases have presented subtle and fascinating shifts in their approach and their mode of delivery.

The Great Destroyer favoured a searing, electric storm, Drums and Guns then found the group tentatively experimenting with electronics, whilst C’Mon felt like a thoughtful, composed patchwork of Low’s past, present and future. With The Invisible Way, the band are still in search of possible new directions and have here opted to work with Wilco’s Jeff Tweedy as producer.

The results are a graceful and immediately likeable refinement of the Low aesthetic. This time, delicately strummed acoustic guitars and sparing, sustained piano chords are the prevailing characteristics of the sound. The songs remain melodically skeletal, perhaps even simplistic, and the arrangements are brilliantly self contained. As always with Low, nothing is extraneous, and the beauty lies more in the emotional effects of their choices than within the lines of the harmony deployed. The combination of Alan Sparhawk and Mimi Parker’s voices in two part harmony remains one of contemporary music’s most haunting sounds, and the slow pace of much of this music (Amethyst is a prime example) exaggerates its melancholy, searching dimensions. That Low still manage to make these fundamental, purposefully direct and simple musical ideas so elastic and flexible is remarkable. Those hoping for a new embrace of intricacy or complexity will be disappointed but the music here always seems designed to serve the group’s lyrics and themes.

Perhaps most interesting here is the emergence of Mimi Parker as a more dominant presence. She has long voiced some of the band’s most intense and remarkable songs (Lazer Beam on Things We Lost In The Fire stands out particularly), but here her presence is inescapable – sometimes confident and assured, sometimes unusually fraught and agonised. There’s the gradual, powerful surge in dynamics in So Blue, or the the insistent, relatively fast-paced Just Make It Stop, on which she achieves a maddened, turbulent energy. On these forceful tracks, Parker harmonises with herself rather than with Sparhawk. Best of all may be the spiritual-sounding ballad Holy Ghost, which once again brilliantly merges the band’s religious and personal concerns.

This does not mean that Alan Sparhawk has been relegated, however, for he has his fair share of inspiration too. On the tempestuous Clarence White, he sounds strained and stretched in the best possible way, pushing beyond his natural range and creating a feverish intensity that battles with the song’s meticulous groove. Waiting feels like a stark recasting of Low’s core values, reasserting the power of Sparhawk and Parker’s voices working together. Mother feels like a masterful co-opting of a familar folk or show tune melody (actually, it bears a passing resemblance to Que Sera Sera), moving from uncomfortable personal revelations to broader spiritual concerns to do with judgement and the end of days. This is as brutal, exposed and unashamed performance as Sparhawk has given.

Using mostly acoustic instruments, there’s an inherent nakedness in this music – it is as if Tweedy has captured the band at their most unadorned and unmediated. This makes the music even more powerful and communicative – but also places it within a wider lineage beyond what might crudely have been termed slocore. There’s a majestic soulfulness here too that makes The Invisible Way one of their strongest, most coherent works.