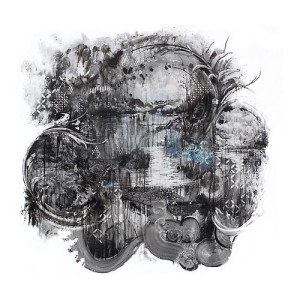 Lubomyr Melnyk is a Ukrainian composer who has spent the majority of his life somewhat unappreciated and overlooked, yet due to the efforts of Erased Tapes his work is now finally receiving overdue attention. One of his defining attributes is his idea of ‘continuous piano music’, a technique which sees him play at rapid speed for prolonged periods of time.

He’s been labelled the fastest pianist in the world and holds the record for the highest number of individual notes played in one hour (93,650 if you’re interested). Such biographical detail has seen him featured in the unfamiliar environs of the Today programme on Radio 4 (alongside a bemused John Humphreys) as well as performing in the more sympathetic surroundings of Café Oto, east London’s haven for all things experimental and leftfield.

The music on Corollaries however is best understood in the context of the label on which it has been released. It was produced by Peter Broderick with assistance from Nils Frahm and it shows from the start. In terms of sound, aesthetic and execution it is hard to get away from the fact it is very close to some of the key albums Erased Tapes have released over recent years. In this respect, the arrangement is a perfect match. The artist gets a label that has a deeply held appreciation and knowledge of the genre whilst the label gets an artist who adds something different and augmenting to their ranks. Indeed, the name of the album seems particularly apt in this way (a corollary being ‘a statement that follows readily from a previous statement’). Importantly, it shows him moving away from his ‘continuous music’ to something that embraces more conventional melody and beauty.

Pockets Of Light contains hints of Arvo Pärt’s tintinnabuli style (albeit in a deeper and fuller way) whilst also registers as stately, lush and quietly virtuosic. His ‘continuous piano music’ may rest on quick-fire execution, but the music in no way sounds frantic or rushed. Following track The Six Day Moment is centred around rich cascades of piano that eventually suggest the sound of delicately falling snowflakes.

As an opening pair they are particularly reminiscent of Nils Frahm, especially in the tiny ecstasies that rise out of his extended solo pieces. They also recall the solo piano pieces that are dotted throughout the music of Simon Jeffe’s Penguin Café Orchestra. A Warmer Place makes greater use of silence, resulting in a relatively reduced, distilled piece while the spindly, gradually unravelling piano cycles of Nightrail From The Sun recall a toned-down, simplified Hauschka.

It may be variously labelled as modern/neo/contemporary classical but it’s just as valid to view this as simply ‘classical’ music (in many ways the music on Corollaries wouldn’t sound out of place alongside the traditional classical repertoire heard in major concert halls across the world). In some respects it is an unusual situation. Melnyk has been composing throughout his life to little recognition or acclaim. He’s finally found a label interested in releasing his music, only to find that Erased Tapes (and other labels) have been putting out stylistically similar music for some time. Yet, this doesn’t in any way detract from the quality on Corollaries. The contents may not be quite as unique or radical as the music he composed decades ago career but the fact that a new generation of music fans can enjoy his music should be a cause for satisfaction and celebration.