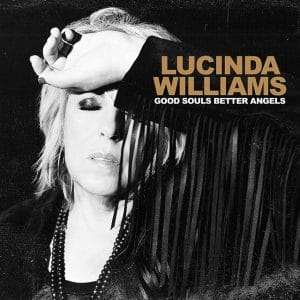 is back, and she’s pissed off. Understandably so – “basically, the world is falling apart: it’s like the apocalypse,” Williams explains in the press notes that accompany her 14th album. And this was before the Coronavirus pandemic and the resultant shutdown.

As you’d expect, the overall mood of Good Souls Better Angels is dark and brooding. The topics that Williams sings about in her marvellously gravelly voice include depression, domestic abuse and the current occupant of The White House (it’s fair to say, she’s not a fan). It may be gruelling listen – especially at over an hour long), but it’s undeniable that Williams remains a uniquely compelling performer.

Musically, she’s at the top of her game. As ever, her long-term backing Buick 6 provide a solid backbone for her songs, and the production from Tom Overby and Ray Kennedy (who she’s reunited with for the first time since her breakthrough Car Wheels On A Desert Road) is appealingly bluesy and smoky. Yet this is very much Williams’ album all the way – her extraordinary rasp of a voice, full of anger, energy and despair.

The opening pair of tracks set up the mood perfectly: You Can’t Rule Me is a blisteringly angry slice of blues in which Williams declares “you might expect me to follow, but I ain’t gonna fall in line” while guitarist Stuart Mathis lets rip a series of thrilling slide guitar riffs. That’s followed by Bad News Blues which sounds like a statement of intent for what follows: Williams railing against “fools and thieves and clowns and hypocrites” while Buick 6 create the perfect barroom jam around her.

While Bad News Blues takes a scattergun approach at her targets, there’s only one subject to Man Without A Soul. Although he’s never actually identified by name, it’s pretty obvious that the titular “man of greed, man of hate…all the money in the world will never fill that hole” is one Donald Trump. Despite the burning scorn that Williams delivers her lines, she still finds time for hope – “how do you think this story ends? It’s not a matter of how, it’s just a matter of when… because it’s coming down”.

It’s not just the political that’s addressed on Good Souls Better Angels. Williams addresses a number of personal topics as well, most shockingly on Wakin’ Up, an unflinching look at an abusive relationship. Her band sound at their best, putting together a relentless blues jam, but it’s the lyrics that grab the attention: “He pulled the kitchen chair out from under me, he pulled my hair and then he pissed on me” before going on to describe how the cycle of violence, then affection, keeps so many women in violent relationships: “next thing, I swear, he wants a kiss on me…but I’m waking up from a bad dream”. It’s hard to listen to, and necessarily so.

Sometimes the tempo is taken down, as on the ghostly Big Black Train which unstintingly describes bouts of depression, and the beautiful, uplifting Good Souls, which closes the album and sees Williams at her very best, vocally. The album as a whole though is at its best when it goes full throttle – Big Rotator being a particularly good example of Williams and her band working in perfect harmony to create something quite awe-inspiring.

There are moments on Good Souls Better Angels that recall mid-’90s Neil Young in its focused fury and righteous anger – some may be put off by the rather grim tone, but if you’re seeking a soundtrack for the end of the world, you’ll find none better than this.