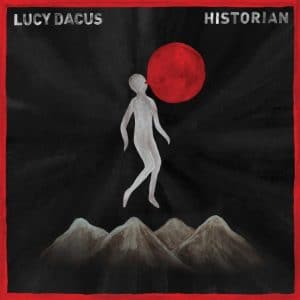 In 2016 Lucy Dacus quietly released No Burden, an album she had recorded in one day, and toured almost constantly for over a year, reaching a wider audience than she ever imagined. This and the success of the highly relatable track I Don’t Wanna Be Funny Anymore pushed Dacus to take her time over this, her second, album. Recognising her responsiblity to her now much larger fanbase, she explains: “This is the album I needed to make. Everything after this is a bonus.”

Historian tracks Dacus as she copes with her life on the road and how the world carries on with or without her being right there. It embraces the struggles of an ordinary and, at times, extraordinary life. Historian is in places dark and despairing, yet there are glimmers of acceptance, light and hope.

Opener Night Shift is the only break-up song that Dacus has ever written. In the same vein as Funny, her clever turns of phrase pull at the heartstrings. Fuzzily distorted guitars stop it getting too schmaltzy as she sings “in five years I hope the songs feel like covers, dedicated to new lovers”.

Addictions speaks to feelings of being outside of “real life” when she’s on tour, and of the safety and comfort found in old habits and relationships. Nonbeliever has a crowd singalong classic in the making with “everybody else looks like they’ve figured it out”.”It’s about realizing your power as a person, and deciding to do the less safe but ultimately more powerful move, which is to move physically forward — show up and march — and move forward politically,” says Dacus.

Timefighter turns to gritty guitars, combining hauntingly with her soft alto to the perfect realisation that “I’m just as good as anybody, I’m just as bad as anybody”. The album closes with the title track, positing that ultimately you need to accept loss and fear in order to be truly alive.

Lucy Dacus has here achieved what she set out to do, marking her place as a brutally honest songwriter who isn’t afraid to go to the darker sides of humanity to find her truth. Her engaging lyrics remain her true strength. But in her quest to perfect this mission statement, the urgent spark present in her debut has dimmed just a little.