Lukas Nelson & Promise Of The Real – A Few Stars Apart 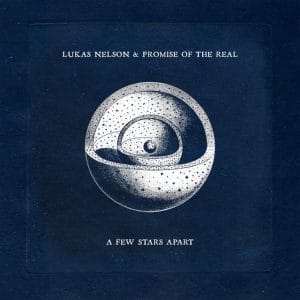 When the children of famous musicians choose to go into the business themselves, they’re opening the door for a whole cabal of critics to throw cold water on their career plans. Some of the most successful musical offspring, like Rufus Wainwright and Miley Cyrus, succeed because they deliberately put some distance between their parents’ styles and their own. Others, like Jason Bonham, Dweezil Zappa and Jakob Dylan, succeed because they appeal to the same fanbase as their parents.

Somewhere in the middle of that spectrum stands Lukas Nelson, the most famous son of Willie Nelson. Where his father plays generally straight country music, with minor deviations into the Great American Songbook or some Tex-Mex, Nelson has always played a soulful kind of country rock that’s capable of switching gears from tear-in-your-beer bar room weepers to head-out-on-the-highway thunder, seemingly at will.

Thankfully, Nelson also managed to find success off his own back, and not just rely on his family name. Firstly, he was the main inspiration behind Bradley Cooper’s character in the A Star Is Born remake, and made some superb contributions to that movie’s magnificent soundtrack. Secondly, he and his bandmates in Promise Of The Real have supported Neil Young on multiple recordings and tours, and played an integral part of Young’s recent artistic revival. Though longtime fans will naturally favour Crazy Horse, they’d have to admit that Promise Of The Real brought out an adventurous, playful edge to the albums and live shows they took part in, and you might find that they think Young and the Real’s 2017 record The Visitor was Young’s most cohesive album in 20 years or so. Thirdly, that voice… Not too dissimilar to his father’s, and not too dissimilar to Paul Simon‘s, Nelson’s golden tones are ideally suited to the honeyed shades of his music.

On the opening track of this new LN&POTR record A Few Stars Apart, Nelson promises that “Despite all the darkness/We’ll be alright,” and if you take a quick glance at his YouTube channel, you’ll see that he’s been living by this credo since the very earliest days of the pandemic. During the bleakest lockdown months, Nelson, his brother Micah, and his fantastic bandmates put together an endlessly thrilling series of covers and ‘at-home’ live versions to keep their fans on the right side of sanity.

Whether it was the brothers playing a rough and ready version of Bill Withers‘ Use Me, or the band adding some country charm to Dire Straits‘ Romeo & Juliet, or the full collective (Nelson, POTR and Micah) tearing through an epic take on Young’s titanic Like An Inca – the closing showstopper of his underrated 1982 masterpiece Trans – the boys sure knew how to brighten any lockdown day. Nelson also does a fantastic solo version of Simon’s The Sound of Silence.

All things considered, it’s not a surprise that A Few Stars Apart is a deep, meaningful and purposefully intimate rock ‘n’ roll record. But what sets this apart from the other LN&POTR albums is that is doesn’t borrow from the past so much as showcase their own strain of cosmic heartland rock. Nelson and the band’s music is cosmic in the way that Gram Parsons‘ is, and it’s earthy in the way that Paul Simon’s is, and conjures images and ideas of America in its purest, most welcoming form. It’s rock music that manages to be soulful, honest and sincere in the era of irony and cultural commodification, and it didn’t have to be – the Nelson name is strong enough to shift units by itself. The album, to put it plainly, is a superb example of rock music done right.

We’ll Be Alright, mentioned earlier, take cues from the kind of spiritual clarity you might find in the music of George Harrison, and it maintains a soft, thoughtful outlook throughout. The musicianship here (and, indeed, throughout the album) is superb. Promise Of The Real – Tato Melgar (percussion), Anthony LoGerfo (drums), Corey McCormick (bass, vocals), Jesse Siebenberg (steel guitars, Farfisa organ, vocals) and Alberto Bof (piano, Wurlitzer, Hammond B3) are all excellent throughout, and have a surprisingly deep well of ideas to draw from, especially considering that this is their third LP in three years.

Early release favourite Perennial Bloom, with its Tom Petty and the Heartbreakers ringing, roaring heartland rock power, is another excellent showcase for the band’s powerful rhythmic sensibilities. They bring that power back around later on in the record, specifically on Wildest Dreams, which is another barnstormer.

Throwin’ Away Your Love manages to balance a raunchy R&B groove with some heartbroken and yearning vocal stylings, leaning heavily on Lukas’ ability to conjure a slow-dance atmosphere at will. A Few Stars Apart, the title track, conjures that ghostly, reverb-drenched piano rock melancholy of early solo John Lennon or even Ziggy-era David Bowie. Not content to stick, the band moves into a lovely, slippery seaside shuffle on No Reason, then move into true masterpiece territory with Leave ‘Em Behind. Here is a cowboy folk rocker that pays homage to all of the inner strength people find to remove toxic people from their lives. It’s an unusually direct and frank lyrical conceit for Nelson, who always tends to hold his cards close, and tends to deal in recognisable imagery.

Giving You Away is tender, careworn and emotionally frank – with the lyrics subtle enough to incorporate multiple readings: is it a father to a daughter, or a lover to another? Hand Me A Light, with its wind in the weeds country charm, is essentially a vehicle for Nelson’s golden voice, which takes on a distinctly old-school timbre. The pair of tunes that close the album, More Than We Can Handle and Smile, are both deep, rich and pillowy. The former is a nimble and fleet-footed cowboy number, while the latter’s spectral soul conjures a wide-open widescreen vista.

If there are to be criticisms of this record, you might find it a little too ponderous and contemplative at times, or perhaps you might think that the album needs to kick into a different gear a bit more often than it manages. However, these are minor considerations in the grand scheme of things.