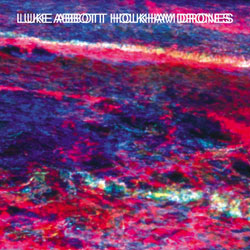 Norwich-based producer Luke Abbott first released material on the much missed Output label, before being rescued by James Holden‘s flourishing Border Community outfit. The Border artists (which include Holden and Nathan Fake) all share a preference for delicate, carefully shaded electronica that, whilst certainly classifiable as dance music, is stimulating to the mind and ear as well as the body.

Perhaps because of this, Abbott has already been mentioned in the same breath as Four Tet and Caribou. But these comparisons are somewhat misleading. Whilst Abbott certainly shares some of the shimmering, beatific qualities often found in Hebden’s work, he is also deeply immersed in krautrock and kosmische traditions. His work is a good deal less whimsical and playful than that of his labelmate Nathan Fake. On Holkham Drones, Abbott luxuriates in pulsating, relentless rhythms, over which he layers sounds in a fascinating and thoughtful manner. Abbott rejects the glitchy, fiendishly complex tendencies of some modern electronica in favour of expansive works that gently unravel.

As much as this album is characterised by familiar four square dance rhythms, it is also notable for its fragile tension, mostly emanating from Abbott’s exploration of basic polyrhythms and from his use of repetition. 2nd 5th Heavy sets the tone perfectly, with its constant, unwavering motif, over which Abbott builds drifting melodies. Appreciation of his arrangements requires close attention to minute details. On the title track, there are subtle, almost imperceptible shifts in rhythmic emphasis. It’s easy to drift into a pleasant daze and suddenly realise that the feel of the music has been transformed.

Much of Holkham Drones is bathed in an appealing, dreamy heat-haze. It seems like outdoor music for aimless, reflective summer days, potentially soundtracking the quiet joy in discovering a new, isolated beauty spot. Abbott’s skill is in his ability to make this music thrilling as well as contemplative. Whitebox, for example, pounds with the energy and intensity of city life. Holkham Drones is somehow confident and expressive as well as introspective.

Occasionally, Abbot makes an unexpected error. On Sirens For The Colour, his banal and irritating superimposed sound effects threaten to undermine the unusual, graceful music beneath. By the end, he has recovered his way, gleefully warping a steel drum sound into something menacingly dissonant. Elswhere, he is a brilliant tease. He gives Hello Tazelaar an extended percussion introduction and for a while it seems as if he might never add anything to this skeleton of a beat.

Holkham Drones improves with every listen. It may eventually reveal itself to be the best release from the excellent Border Community label so far. Abbott is certainly interested in the effects of repetition and these irresistible drones are refreshing and imaginative rather than ugly, mechanistic or harsh. This is a prime example in how to make machine music sound warm and human. Listening to it is like entering a lucid dream.