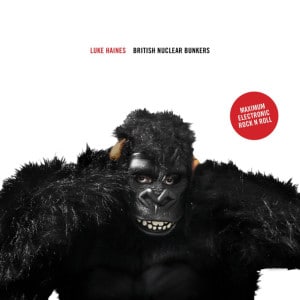 “This is an emergency broadcast from the BBC. Information of a possible nuclear strike against this country has been received.”

Having spent much of his solo career excavating Britain’s recent past – Off My Rocker At The Art School Bop‘s salute to a ’70s childhood, the self-explanatory Nine And A Half Psychedelic Meditations on British Wrestling of the 1970s and early ’80s – Luke Haines here envisages a near future, where the population has retreated into a subterranean network of bunkers, which is illustrated almost wordlessly and performed wholly on analogue synthesisers. (‘Maximum electronic rock n roll’, as the cover indicates.)

He has previous here, of course: the subversively chart-bothering Black Box Recorder employed twisted synth-pop, and Auteurs side-project Baader Meinhof – with hindsight an early, extraordinary start to his solo career – fused deep, funky synth with tabla and strings. But this is the first of his solo albums to be so dependent on instrumental composition – even the excellent soundtrack to Christie Malry’s Own Double Entry (2001) (whose Essexmania flirted with pounding techno) was more song-based than score.

Given that Haines’ last few releases have included such esoterica as a ‘micro-opera’ about the ruined caravan holiday of a Mark E Smith impersonator and a cookbook (of Outsider Food And Righteous Rock And Roll), it might be tempting to expect British Nuclear Bunkers to be little more than experimenting for its own sake, or high-concept arch-contrarianism. But there’s much to admire from the outset here: the title track’s ominous crawl – with shrill sirens and the kind of phasing percussion that drove The Human League’s Being Boiled or The Normal’s Ballardian nightmare Warm Leatherette – leads with a throbbing whistle into Camden Borough Control (the facility in NW5 that inspired the project) where atmospheric clanking intersperses Yellow Magic Orchestra keyboard lines and string pads, contrasting Test Card Forever’s up-tempo Popcorn plink and squelching bass.

There’s a great sense of atmosphere throughout, redolent of the dystopian TV sci-fi of Terry Nation’s Survivors (although Haines is clear that this is a utopian vision, more News From Nowhere than Nineteen Eighty-Four) or the BBC Radiophonic Workshop’s soundtrack to the disquieting children’s series The Changes, which as a vision of a society coping after being driven to destroy all of the technological advances it took for granted has some parallels here.

Although mostly wordless, there are occasional vocal interjections: “Cold Field Morning Under Bliss” are Haines’ first words, intoned through mechanising effects and in a monotone drawl over that track’s unsettling thrum, while Bunker Funker and Mama Check The Radar At The Radar At The Dada Station’s vocals are distorted like the primitive samples of the bit game soundtracks that the chiptune melodies and glitching percussion recall. Meanwhile, on Pussywillow – like a lost John Carpenter score for the Children’s Film Foundation – the title is sung by the children of the bunkers, calling to mind The Wicker Man‘s pagan Maypole song.

Worship of a similar kind is reflected by the gleaming surface of the New Pagan Sun: “a piece of silverware,” according to the notes, “found in a bunker at Stoke on Trent, near to the location of the 1980 Darts World Championship final between Eric Bristow and Bobby George”. (So that clears that up.) Subdued, snarling darkwave pop, it’s the most songlike moment here and a fitting finale to the fiction, before the epilogic Deep Level Shelters Under London in which a robotic voice reels off a list of real-life Cold War nuclear bunkers around Britain.

From a songwriter of this calibre, a maven of the lyrical barb, it might seem odd that an almost wholly instrumental album should stand among his most compelling, entertaining solo work, but British Nuclear Bunkers is exactly that. Haines wrote recently that “the idea of living a hermetic subterranean life has its appeal”. We can only hope that he’ll continue to surface occasionally.