Luke Haines – In… Setting The Dogs On The Post Punk Postman

by Lewis Oxley
published: 7 May 2021 in Album Reviews
Tweet 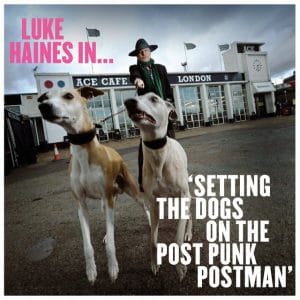 There are few, if any, songwriters who are as obtuse and abnormal as Luke Haines. The ex-frontman of The Auteurs and Black Box Recorder has remained a reclusive figure, always on the periphery for the better part of 30 years. In that time Haines has forged a career of reluctant fame. Once dubbed the accidental inventor of Britpop, Haines’ musical persona has maintained its originality, at the expense of being commercially underrated.

Haines’ new album In… Setting The Dogs On The Post Punk Postman is a quick follow-up from 2020’s collaboration album with R.E.M. guitarist Peter Buck entitled Beat Poetry For Survivalists, a post-punk endeavour centred around wild characters who get up to all sorts of surreal shenanigans. The surreal theme is unchanged in Haines’ artistic vision on this album as it tries to fuse the fragments of the banal everyday and current political events.

The album was recorded over lockdown, but Haines explicitly deviates from making this an album about lockdown. The opener Ex Stasi Spy is a political folk ballad based on the Salisbury poisonings in 2018 and is delivered with the tongue in cheek wit in Haines’ tone of voice, making it both powerful and comedic. Haines’ vocal persona in this track is supported by dreamy ’60s guitar riffs and cloudy melodies, paying homage to the psychedelic British invasion. A similar sentiment is captured on Never Going Back To Liverpool, a track that irreverently takes a dig at the city of Penny Lane, while holding its song structure.

The album goes from homages to ’60s psychedelia to full-blown off colour surrealism. The song titles are enough to overwhelm with weirdness (Yes, Mr Pumpkin, When I Owned The Scarecrow, the title track and Two Japanese Freaks Talking About Mao And Nixon) – are we listening to a record, or are we in Haines’ childhood diary?

Wherever we are with this album, it takes strange dreams to the next level. The stand-out track, the Ivor Cutler eulogy Ivor On The Bus, is barmy as it is brilliant. It samples audio of an interview with Cutler describing himself in his wispy Glaswegian accent, in which he says “I’m a child”. Indeed, Cutler’s admission to this recaptured youth evokes a childish quality to Haines’ songwriting and influences, turning his songs into adult nursery rhymes.

In… Setting The Dogs On The Post Punk Postman is a plunge into the depths of Luke Haines’ eccentric universe, one full of wacky characters who feel like family members, and where anything normal is weird. Yet despite the weirdness, this album brings a surprised feeling of comfort that takes the edge off.