by Andy Baber
published: 19 May 2014 in Album Reviews
Tweet 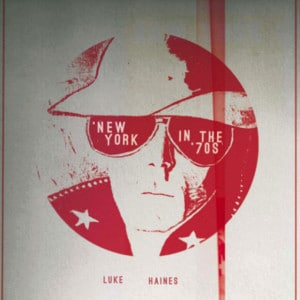 Luke Haines has been delighting, bewildering and surprising listeners in equal measure for more than 20 years now. Ever since finding success with The Auteurs and the band’s Mercury Prize-nominated debut album New Wave in 1993, Haines has consistently defied expectations and set himself apart from virtually everyone else around – whether it be with a band such as Black Box Recorder or on his own.

However, the serial frontman – who is also handy with a pen in hand, as shown by his two published books – is arguably at his most unique when going solo. A quick glance at just the titles of his last two records, 2011’s Nine And A Half Psychedelic Meditations On British Wrestling Of The 1970s And Early ‘80s and last year’s Rock And Roll Animals, tells you all you need to know about the way Haines’ mind works, and his ability to both inspire and flummox is no different on new album New York In The ‘70s.

The record is the third and final part of his psychedelic concept trilogy and has been described by the man himself as “a mythic re-imagining of the New York rock and roll scene 1972-1979”. As such, there are nods to a number of artists and creative figures from the period throughout its 34-minute running time, with opener Alan Vega Says a delightful introduction to what Haines is attempting to achieve – naming the vocalist of American electronic duo Suicide.

“Alan Vega says it’s going to be a great big hit/ if Alan Vega says so, then it probably is,” Haines whispers with a sense of playfulness, over searching synths and an irresistible guitar melody. This playfulness is irrevocably tied to the album throughout, with title track NY In The ‘70s another example of his brilliantly tongue-in-cheek lyrics. “Everybody’s gay or bisexual/ a man called Jim getting experimental,” he sings, as fuzzy synths almost drown out a lackadaisical guitar hook.

As well as evoking the names of famous figures from New York during the ‘70s, another significant theme central to Haines’ latest LP is his use of repetition. It is something that crops up time and time again and while it is largely successful, there are occasions where it becomes a bit much. Jim Carroll and Tricks N Kicks N Drugs are two examples of where Haines gets the balance right, with punchy, repetitive guitar hooks providing the perfect backing.

The same cannot be said for the song titled after the legendary lead singer of The Velvet Underground, Lou Reed, which does not quite reach the same level. As genius as Lou Reed unquestionably was, hearing his name repeated again and again and again is not nearly as appealing as it sounds. UK Punk is also a miss, with Haines repeating the song’s title over excruciatingly grinding synths, while the psychedelic Bills Bunker does not quite capture the imagination like the rest of the album.

Yet when Haines does get it right, New York In The ‘70s is a brilliantly witty and intoxicating listen. Doll’s Forever is an almost euphoric tribute to New York Dolls frontman David Johansen, before the infectious New York City Breakdown delivers another example of Haines’ brilliant lyricism. Then there’s the epic album highlight Cerne Abbas Man – yes, named after the ancient naked figure sculpted into the chalk hillside in Dorset – which sees Haines repeatedly chant “Mythic motherfuckin’ rock and roll”.

It would have been a suitable closer on its own – especially as it essentially sums up the record – but that honour is instead given to the dreamy NY Stars, which brings everything full circle by revisiting Alan Vega Says. Ultimately, Haines has once again succeeded in producing a surreal, engaging and magnificently wry collection of songs that provide a satisfying conclusion to his concept trilogy. As endings to trilogies go, New York In The ‘70s is definitely more Toy Story 3 than The Godfather Part Three.