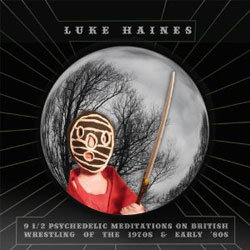 At first glance the title of Nine And A Half Psychedelic Meditations On British Wrestling Of The 1970s And Early ’80s and the titles of the songs contained within, Rock Opera In The Key Of Existential Misery being a prime example, suggest that misanthropic genius Luke Haines has gone mad. Yet once his familiar biting vocals kick in, the marriage of his music to the theme of wrestling makes perfect sense. Both have a grimy, otherworldly elegance.

Inspired by the cover photo of glam rock wrestler Adam Street which adorned the cover of Black Box Recorder‘s 1998 tome England Made Me, Haines has revisited a time in his life spent in front of World Of Sport on a Saturday afternoon and occasionally watching live bouts at Portsmouth Guildhall. Giant Haystacks, Catweazle and other stars from the era are all paid tribute in the inimitable Haines way. In his world, the opening couplet “I was trying to understand how a beautiful bouncing baby becomes an ‘orrible man” is an homage to ‘Rollerball’ Rocco.

Whether a Venn diagram of Luke Haines admirers and wrestling fans would find many to fall into its intersection is a moot point. No matter, his songwriting is still impeccable. His skill with a melody means that he effortlessly turns the oddest, bleakest subject matter into perfectly crafted ‘pop’ songs – of a sort. That’s how he nearly ended up being an unlikely Britpop star all those years ago with The Auteurs.

There’s also a fragile and vulnerable side on display in these stories of ‘unusual men’ who Haines often places in odd situations. While the beeping ‘80s rhythm-fuelled Big Daddy Got A Casio VL Tone is great fun, What The Plumber Saw is a 55-second half-whispered anecdote over eerie Doctor-Who-on-acid swirling synths. Domestic chat of badly installed water boilers while Kendo Nagasaki sits watching television in the other room is rendered quite menacing.

Eccentric and intriguing, Nine And A Half Psychedelic Meditations On British Wrestling Of The 1970s And Early ’80s is just what you’d expect from Luke Haines after all.