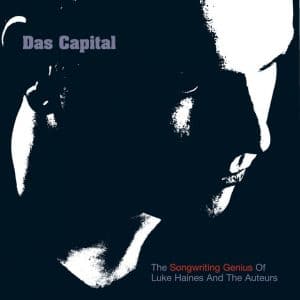 Luke Haines is one of the most respected British songsmiths of the last 15 years, so it’s good to have this retrospective detailing the best of his work with The Auteurs, Black Box Recorder, Baader Meinhof and, of course, Haines himself. In a neat twist to the tired “best of” format there are three extra tracks and the album has been re-recorded in wide screen orchestral arrangements.

It works, with Haines coming across as the macabre balladeer, that sinister husky voice of his ever more to the fore. The expansive How Could I Go Wrong does well in this guise with the guitar line (shades of Santana?!) a majestic opener before the strings drape their treble line over the top. What’s evident here and elsewhere is that the music retains its urgency and edginess, nowhere more so than on Lenny Valentino, which still rocks, and on Showgirl, where the complete standstill half a minute in has the same powerful impact.

Production on Das Capital is heavy on the strings but not usually intrusive, with violins up in the heavens on Starstruck but subtly restrained on the sublime closer Future Generation. The male voice choir in the middle foreground of Baader Meinhof is a nice touch.

As a bonus, if you start playing track 1 and hold the rewind skip function on your CD player you’ll come across more Haines in the form of a medley, containing elements of Back With The Killer Again, The Rubettes and Tombstone amongst others. Not bad for one medley, although it must be said I struggled to get this to work on all the CD players I used. See how you get on – whether you find it or not, you’ll still own a choice document by one of the most important songwriters in 1990s Britain.