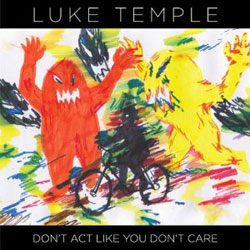 Between Phil Selway‘s inoffensive output, J Mascis‘ subdued melancholia, and Craig Finn‘s impending “more vulnerable” debut, it’s been a pretty good time for notable names in respected bands putting out tangential records under their own name. The results haven’t been perfect, but it’s been endless fun deciphering why these songs weren’t for the patriarchal bands; sometimes they’re just not good enough, sometimes they’re the residue of an unspoken hiatus, but mostly, especially with Selway’s Familial, it seems like these records belong to a sole proprietor, not a collective.

Don’t Act Like You Don’t Care is a little different – well, different in a sense. It is still a collection of evocatively normal songs coming from a source best known for cutting his teeth on the warbled and weird (in this case, Here We Go Magic), but this thing apparently dates back to 2008. In the interest of capitalism and Here We Go Magic’s curiously strong commercial attention, Western Vinyl is putting it out now – showcasing a strong, but curiously anachronistic image of Temple’s craft.

Internally this is apparently referred to as “the country record.” It’s fairly obvious why; Temple embraces the feathery textures of classic, creaky folk-pop. Moonshine duets, thick brushwood guitars, and jangling piano – his best songs come together when he sounds like he’s having rambunctious, unbuttoned fun. The heart-swelling, blue-ridged anthems Ophelia and How Could Muscle are the most palpable; it’s nice to see the guy swing in wide arcs of melody, especially considering how solo stuff tends to be terminally closed-in.

Of course most of Don’t Act Like You Don’t Care is quiet, introspective and thin-lipped, and that’s where Temple renders himself inessential. It’s difficult to talk about things like the simple pleasures of solo-acoustic balladry as a comparative science; some songwriters just have that abstract gift that makes their stories more engaging than others. Temple isn’t one of the lucky ones; he tends to bring a cryptic, detached sense of composition to a craft that’s generally the best when it’s up-close and direct. The campfire weirdness can work (just look at Woods’ entire career) but for Temple, most of the subdued cuts fall into easy, boring categorization. He’s most likable when he thoroughly embraces his upbeat, open-plains swagger.

It’s fair to say the reason the red-blooded country parts of Don’t Act Like You Don’t Care connect is because simply, it’s the least expected direction for someone like Luke Temple. The quiet, sparsely-textured solo effort that’s released between tour schedules routine is teetering on the edge of cliché and completely unbearable; so at least Temple is (or was – remember this was recorded three years ago) willing to try something a little left-field. It’d certainly be nice to see that become a trend, but again, there’s absolutely no doubt what you’ll want to play when you want to hear the man’s craft. The same could be said for pretty much every album like this.