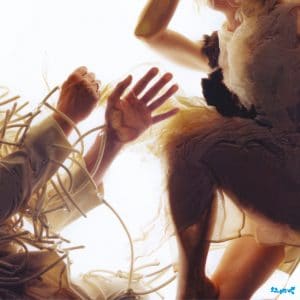 When Laura Marling and Tunng‘s Mike Lindsay first formed LUMP, back in 2018, most people thought it must be a diverting side-project. Given Marling’s productivity – last year’s Song For Our Daughter was her seventh album in 12 years – it was hard to imagine where they’d find the time to reunite.

Yet reunite they have, and we now have LUMP’s second album, Animal. It’s a natural progression from that self-titled debut, but this time it feels like a more coherent record. Whereas, first time around, it felt like a bit of a novelty hearing that voice (so indelibly associated with acoustic folk) over Lindsay’s electronic soundscapes, Animal is more of a fully formed album rather than a mood piece.

Lindsay has apparently based most of the songs on Animal around the Eventide H949 Harmonizer – an effects processor much beloved of Brian Eno and most famously used by Eno and David Bowie on Low. It’s that classic album that’s sometimes brought to mind with LUMP – the soothing drone on opening track Bloom At Night in particular.

What really grabs the attention about Animal though is its energy. For, as wonderful as Marling can be, that’s not a word you usually associate with her music. When paired with Lindsay though, it’s a different story – the album highlight We Cannot Resist could almost be a huge disco anthem: bright, pulsating and blessed with an almighty chorus that you’ll be singing along to all summer.

That same energy pulsates through the excellent title track, with Marling commanding the listener to “dance, dance, this is your last chance to break a glass heart”, and Climb Every Wall is driven along by Lindsay’s relentless bassline. Marling’s lyrics, apparently inspired by her recent interest in psychoanalysis add to the slightly otherworldly feel.

LUMP are just as effective though when they bring the tempo down a bit. Red Snakes is a heartbreaking piano ballad, so spectral and fragile that you’re afraid it’s going to break at any moment. Paradise is another intriguing moment, Lindsay’s gurgling synths providing the backdrop to another strong vocal from Marling. Only the short instrumental Hair On The Pillow feels a bit superfluous, a music-box interlude which sounds like it’s been beamed in from the nearest fairground.

The switch from the more danceable moments to the more laidback tracks is seamless – the breathless We Cannot Resist, with its talk of “thick-blooded hedonists”, effortlessly glides into the short, shimmering acoustic lament Oberon and you hardly notice the join. By the time that the excellent Phantom Limb (no relation to the Shins track of the same name) closes with Marling reciting the album’s credits, you’ll want to go right back to the start again.

Hopefully, Marling and Lindsay will find enough time for a third LUMP instalment – the chemistry that they produce is far too good to be relegated to a side-project.