by Thomas May
published: 24 Sep 2012 in Album Reviews
Tweet 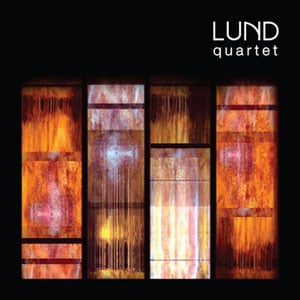 Lund Quartet’s self-titled debut album positively oozes good taste. Dripping with the austere Scandinavian cool of the music found on Manfred Eicher’s ECM label, the Bristol based group takes a remarkably restrained approach to instrumental jazz. This music is improvisatory yet democratic, with no one musical voice allowed to dominate; the separate instrumental threads coalesce into a billowing gauze of sound which meanders through the loose compositional structures as a single entity. This music is saturated with a humble self-confidence, shot through with a refined poise and eloquence made all the more remarkable by the realisation that this is the group’s first full length album.

Subtly subverting the now rather archaic institution of the jazz quartet, Lund Quartet augments its conventional line up of piano, double bass and drums with turntablist Jake Wittlin. Whilst this addition could potentially have come off as little more than superficial gimmickry, Wittlin’s scratching and understated manipulation of the live instruments is fully assimilated into Lund Quartet’s whole. As such, the rare occasions when his input is prominently heard are transformed into almost epiphanic sonic events: the fleeting moments of scratching that punctuate the spectral vocals floating atop Loves Madness are some of the most striking of the album. Even the more unassuming touches added by Wittlin serve to deepen the group’s otherwise precariously smooth musical texture: the hint of echo adorning the horn stabs of opener Sequoia serve to fracture the music’s surface, enveloping the bright timbre of the piano in an intoxicating ambiguity.

Whilst this record is certainly remarkable in extracting such intrigue from severely sparse means, Lund Quartet’s persistent adherence to their formula treads a fine line between the elegant and the banal. Occasionally lacking in the inspiration found on the aforementioned Loves Madness and Sequoia, this record is not immune from slipping politely into the background. In reigning in the distinct voices of its individual members, the group has achieved a beautifully nuanced collective identity, yet on occasion one can’t help but wish the players would throw caution to the wind and indulge in the spontaneity of untamed improvisation. Indeed, the most tightly controlled compositions on the record suffer from a lack of individual identity and innovation, at worst regressing to a meek imitation of Tortoise and other groups inhabiting the jazzier ends of post-rock.

Yet this is not a straightforward complaint; had they allowed themselves to bend the strict parameters of their music Lund Quartet may have all but destroyed the intricate counterpoint of unity and rupture that so mysteriously anchors this album. Therein lies the ultimate limitation of this music; in aiming for such a fully integrated, reserved approach to both composition and performance, Lund Quartet have reached a unique and graceful artistic identity whilst simultaneously restricting the potential for their music to develop beyond its original premise.

Lund Quartet’s debut album exists in a vaguely defined vacuum between genres and any confusion provoked by the record will largely be due to the inevitable difficulty of neatly compartmentalising the music: that which is indefinable – for which no prior category exists – is often the hardest to decipher. Yet it is for this reason that this record should be considered a considerable success: not many musicians achieve such originality over the course of their careers, and even fewer do it with such little fanfare.