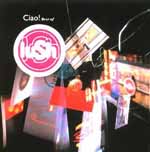 Lush – who they? Well, they were a British band who released a pile of albums in the 1990s and had limited top 40 success, not least with the title track from this compilation album, Ciao!, a duet with Jarvis Cocker – a song “basically (about) two people telling each other to fuck off”, as co-writer Miki Berenyi would have it.

But as the illuminating biography supplied with the album indicates – and as the music reinforces – Lush were rather more than this.

With Cocteau Twin Robin Guthrie helping with production duties and tours of Europe and America a too-regular feature of their band life, Lush are here portrayed as a band who suffered the bad with enjoyment of the good.

With seperate writing from Emma Anderson and Berenyi, Lush encompassed fun times with tracks like Lovelife (sounding like a cross between Duran Duran and Garbage tripping and typcal of Berenyi), soulful guitar-led epic drones like Desire Lines (Anderson) and pure punk like Ladykillers (Berenyi).

They endured a love-hate relationship at their core between Berenyi and Anderson, enshrined in the album title Split – and then the tragedy of band member Chris Acland hanging himself in the Lake District, at which point the already estranged band jacked it all in.

It is not clear how much the in-fighting in the band led to his – and its own – demise, but it is unfortunate for anyone hearing Lush now. They will know that they will never hear the band live again and the music on Ciao! sounds like it would go down a treat at festivals now just as well as it does on a Discman. The listener reaches the end of the 18-track album realising that the genius for pop which this band had was rather special.

Ciao!, in managing to show this at least, does its job well. As Etheriel winds up, what’s left is a fine introduction to those who never knew Lush, or a summing-up for those who watched with passing interest as a band was born, grew and fell apart.