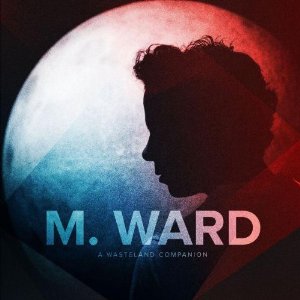 How sweet. M Ward – or, to be all Prince about it, the person formally known as Matthew Steven Ward – has released a solo album.

Of course, you may think this lacks news value considering the previous seven efforts already offered up by Portland’s prolific troubadour. But it will always be surprising to see Ward go it alone – he being the serial polygamist formerly of Rodriguez, Monsters Of Folk, She & Him and countless hookups, knock-togethers and side projects. (Including a dalliance with Norah Jones. But let’s move on.)

Even Ward’s latest, A Wasteland Companion, is a harem of collaborators with cameos from Sonic Youth’s Steve Shelley, fellow MoF-ster Mike Mogis, and, of course, Zooey Deschanel. (As there are 15 other contributions, this is to name, quite literally, just a few.) And Ward’s musical oat-sowing even belies a generic monogamy. “Singer/songwriter” is about as accurately as you can pin him down – his music being a rootsy Americana where the husky vocal and picked guitar refuses to sit placidly in the Country / Folk corner, forever grabbing at Gospel / Rock and wanting to play with countless other, subtler influences besides.

If there’s a continuity to the newest album, then, it’s only that all his offerings suggest a matching sense of restless recreation. There is, undoubtedly, a core of warm, ear-nuzzling tracks that hint at a knowable M Ward style. Crawl After You, Wild Goose, and There’s A Key are all beautiful – as is opener Clean Slate, which seems to set the tone with its longing, mellifluous lilt: wistful and sweet, and flecked with tinges of bluegrass homeliness. Yet the tempo then ticks sharply up in Primitive Girl, and by track three, Me And My Shadow, we’ve entered an odd melange of fuzzed-indie and jive-hall spin. This switching, lurching effect carries throughout and it’s bewildering – but actually also refreshing.

Ward seems eclectic – haphazard even – but without any suggestion that he’s overreaching, or that he’s scrabbling through the annals in a desperate bid for ideas. He’s creative – boundlessly, unstoppably, charmingly. Even the faltering candypop of Sweetheart, a ’50s doo-wop nonsense that Ward may have been talked into by Deschanel, makes sense for this reason. Because, unlike Zooey, whose many creations from the Elf-baiting waif to the horrendous New Girl (and the music in between), seem horribly effected – and worse, moulded deliberately towards a desperately idealised persona for which it’s hard to feel any real fondness – there is nothing of this design with Ward’s output. He seems as though he just can’t help but create; as though he were blessed with a musical fecundity that leaves him, at times, a little unable to care for all his offspring. And while there is a Deschanel-esque soppiness here that is unwelcome – that Jack Johnson side; the moment where appearing on a Norah Jones album makes sense – as part of a more balanced persona it’s just about acceptable.

There’s no obvious hook on which to sell A Wasteland Companion. It’s too varied – perhaps to its detriment. But there’s a craft in exploring music this widely: to be in a place where singer/songwriter is the only, and best, description – and Ward is one of this genre’s best: playful, diverse, and endearing, he has the crucial thing needed to make it work: charm.