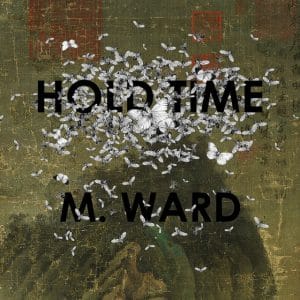 Until not so long ago, M Ward was an astonishing guitar player who could turn from John Fahey-like melancholy to a frazzled free-form hurricane in an instant. He is now no longer content with being a mere fret master.

The Portland, Oregon-based guitarist and singer has made several fascinatingly unusual albums. His first, Duet For Guitars #2, was released by Howe Gelb as a labour of love on his own label – high praise indeed. Later works – Transfiguration Of Vincent, Transistor Radio, Post-War – presented the musical equivalent of a lopsided grin, with a quietly virtuoso acoustic guitar on one side, and a tantalising hint of Derek Bailey on the other.

Another element in M Ward’s idiosyncratic muse has always been a love of pop. Thus, there were his versions of Brian Wilson‘s You Still Believe In Me, old mop-top JS Bach‘s Well-Tempered Clavier, or even David Bowie‘s Let’s Dance. All in all, it was a mad and wonderful mixture which Noel Gallagher found so enthralling he tried to sign Ward for his own record label.

So now comes Hold Time, Ward’s first album under his own name for three years. Reviewing an album is, as we all know, a highly subjective matter. Hold Time has already garnered a clutch of excellent reviews, something that M Ward will be thoroughly accustomed to by now. To these ears, however, the sheer ghastliness of this album is almost beyond words.

Ward’s singing voice is a thin croak at the best of times – perhaps that was the reason he focused on his guitar skills in his earlier days. Here, its highly stylised amateurishness borders on the involuntarily comical.

He has spoken before of his love for the kind of pop song Roy Orbison used to sing. Here, he reaches a little farther back in music history to dip his toes in rock’n’roll on one hand, and the croony song styles of the 1950s on the other.

There’s the occasional hint of twang-guitar, there’s a slow-motion version of Rave On, a hit for Buddy Holly in 1957, and there’s a lot of pseudo meaningful mush. Songs that sound as if Ward had applied Oasis‘ songwriting technique of re-assembling well-known bits of Beatles songs to the 1950s, only with less panache or taste.

Ward’s last album, recorded with the actress Zooey Deschanel and released under the banner of She & Him, already indicated a growing interest in this kind of “classic songwriting”. I didn’t like that album much either – it seemed just a little too recherché and, in its supposed simplicity, too stylised.

Hold Time goes one step further by drowning the whole caboodle in a bizarre new sound that incorporates cheesy synthetic-sounding strings, a hint of Phil Spector as well as that resolutely unpretty croak. Perhaps the whole thing is intended as a kind of theatrical performance, an attempt to create a patina of mustiness to go with the old-fashioned styles, thus performing a smart double bluff on trend hounds and fashion theorists.

Whatever the conceptual reasoning, it doesn’t make the resulting sounds more easily bearable. The absolute nadir arrives with a version of Don Gibson‘s maudlin Country number Oh Lonesome Me. Ward sings it in a duet with Lucinda Williams. Whilst he wheezes along in his by now dreaded but accustomed manner, the normally solid Ms Williams achieves the considerable feat of sounding like Bonnie Tyler after a 48-hour smoking binge.

There is one very nice track on Hold Time though. It’s the instrumental finale called Outro – a hint, perhaps, of a future direction in soundtracks. Without his voice, it proves to be the record’s real highlight.