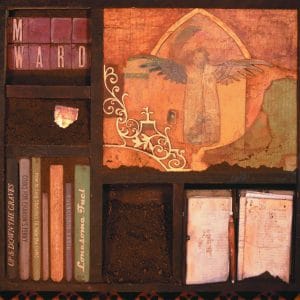 Matt Ward’s fourth outing under the M Ward moniker is a concept album of sorts. A sticker on the front of the CD proclaims “Memories of a utopian radio power…” and the record is dedicated to “the last of the independent and open format ones of any kind” – those not swallowed whole by Clear Channel and their ever narrowing definition of pop music.

The album is wrapped in a gossamer haze of static and echo, recalling the AM radio fuzz of pre FM days when a short turn of the dial could conjure up blues, country, folk, gospel or early rock n’ roll. You can picture Elvis Presley listening on his truck radio, soaking up a diverse range of influences and cross breeding them to create the future.

The album is book ended by two instrumentals. It opens with a beautiful acoustic version of the Beach Boys‘ You Still Believe In Me recalling Sunspots from Bob Mould‘s Workbook album. The ghost of Vini Reilly surfaces on the closing Well-Tempered Clavier – well, if Vini was raised in Tupelo instead of Manchester that is.

The record unfolds like a series of watercolours unearthed in a dusty faded attic journal. The shading and colour added by a cast of Alt Country guests including Vic Chesnutt, Nick Luca and Jenny Lewis.

Vibrations of Hank Williams Snr and the soundtrack to O Brother Where Art Thou reverberate in the lo-fi nature of several tracks. Bakelite vocals that sound like they where recorded in a cave and tinny guitar sounds. One Life Away and Deep Dark Well could have been culled from a Folkways LP.

The wonderful Hi-Fi is all dolorous cellos and an interment short wave radio signal that drops in and out of the mix. Wards vocals are weary and hushed. Fuel For The Fire retreads the ground of Glen Campbell‘s Wichita Lineman, a tale of a lonely traveller set to a twisting melody and plaintive guitars.

The tempo ratchets up on trio of songs. Four Hours In Washington is an insomniacs lament propelled along by a thumping back beat provided by PJ Harvey collaborator John Parish. Regeneration Number One is a spicy Tex-Mex instrumental twanging guitars and marching beats. Howe Gelb plays up a storm of good old time rock’n’roll piano on the rollicking Big Boat. Ward stretches his voice hollering like a circus ringmaster – a real hoe down.

Paul’s Song is another tale of the lonesome traveller “where every town is all the same” the glamour of travel undermined by its rootless prosaic nature. A pedal steel guitar reflects the loveless lyric, “Where the waitresses all meet you with a frown”. Edward Hoppers lonely American hinterland in song.

Lullaby + Exile is a jewel. A strummed shuffle, Ward’s aching voice intones “Where the sound of a bell, can sound like angels crying, or sunlight multiplying, through a Virgin Mary in stained glass.” A few piano notes fall like tear and a wistful daydreamer whistles a desolate tune. Yet hope returns as Ward sings that “love will get you in the end”. It evokes the Nashville of Lambchop in a 1940’s time warp.

Ward shows a remarkable understanding and love for some long neglected musical forms. His wit and warmth elevates the material above a simple excise in nostalgia. The honesty and levity in the song writing adds depth. Grab your torch, turn out the lights, snuggle under your bed sheets and wallow in the haunted and beautiful sound of this record.