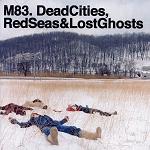 M83 are the next indie movie soundtrack band from the country that brought you Daft Punk and, more pertinently, Air. Unsurprisingly, their sound can be found a mere stone’s throw from that of their more widely-celebrated Gallic peers.

The problem often associated with computer-generated music, and thus with Dead Cities, Red Seas & Lost Ghosts, is that it has a tendency to sound detached and clinical, like an audio equivalent of a dentist’s practice. Additionally, electronic artists are often elaborately pretentious; good examples come in the form of Japan’s Cornelius and the already-mentioned Air. Going on the album’s sound (not to mention track titles), this also appears to be the case for M83.

Unrecorded is certainly agreeable, but seems to be inviting the listener to look for depth that simply isn’t there. It’s a nice chord progression, competently engineered, but that’s it. On track three, Run Into Flowers, M83 once again make the mistake of creating a coherent noise and giving it a “profound” title. It will do for an Ikea advert, but it will not hold your attention for much longer than that.

In Church is as gaudy as its title suggests; America promises much but delivers precious little, and the ridiculously titled On A White Lake, Near A Green Mountain is as arty as they come but, quite frankly, mundane. In fact, I don’t think I’ve ever felt further from a white lake or a green mountain.

Trudging on into the second half of the album, you’d be hard pressed to get through Noise without reaching for the skip button, whilst Be Wild suggests that M83 thought the concept of having a two minute intro of droning synthesisers was such a good idea that no track should be without it.

After this there seems little point in listening to Cyborg (an ’80s sound lacking any kind of irony); 0078H (vocoders have never sounded so dull); Gone (see Be Wild) or Beauties Can Die (that dreamy, lullaby riff should not be submitted to such an awful background noise).

There you have it. M83 fall far short of standards set by the likes of Air, and somehow manage to be even more pretentious and even less talented. Cornelius is quirky and fun, Daft Punk are downright funky, but M83 are either in on something that we’re not, or have been locked away since 1987. Either way, Dead Cities, Red Seas & Lost Ghosts is the kind of album that makes you thankful to have a skip button. Or, in this case, an eject button.