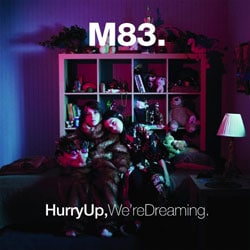 Mention the term “concept album” to most people and their eyes instantly glaze over. Mention that it sprawls out into a two-disc set and they might well mumble about Pink Floyd‘s The Wall and then moan about The Beatles‘ White Album and how those bands should have cut out all the chaff to leave a good single album rather than a patchy affair that doesn’t quite work.

It takes a brave band or artist to tackle a double album. It’s a format that is frequently viewed with suspicion, and often leads to accusations of pomposity, rampant ego, and a lack of critical editing on the part of the artist. Yet there’s something undeniably admirable about the double album – perhaps it is the curate’s egg nature of them – and to lose them in a technological world where it is all too easy to clip an album of any length down to its highlights would be a massive shame.

Hats off then to M83 mainman Anthony Gonzalez who has maintained his artistic poise and come up with the rather wonderful Hurry Up, We’re Dreaming; an album that holds its own alongside M83’s splendid back catalogue.

Childhood experiences and dreams form the concept of the album, and, i f that weren’t enough, the album’s two halves represent the differing perspectives of a brother and sister. Despite the conceptual nature of Hurry Up, We’re Dreaming it doesn’t suffer too much from poorly formed ideas or songs being thrust into the mix in order to fulfil a narrative.

Occasional forays into instrumental filler tracks aside this is a fairly consistent set of songs and although Gonzalez has experimented with new instrumentation and vocal techniques, the album thankfully doesn’t veer off into impenetrable wild experimental territory. In fact, this could well be the most outright pop album M83 have made to date, with a majority of the songs owing a large debt to ’80s electro in particular. Take, for example, recent single Midnight City, a song positively dripping in ’80s influences from the huge clattering drums, the addictive main riff (it’s a vocal not a synth amazingly) to the shameless closing sax solo it’s all there.

OK Pal also revels in the sounds of the ’80s. The main hook is used sparingly as seems to be standard for many of the songs here, but even within the more restrained verses there are massive nods to the likes of Harold Faltermeyer and Jan Hammer. For those who fear the sounds of ’80s this would be a significant problem, but Gonzalez embraces his influences and makes them his own, as he always has done. The slap bass found on Claudia Lewis might be a step too far as even that can’t be offset by the killer hook the song possesses.

It’s not all 80s pop though, Year One, One UFO begins life as a peculiar Grecian sounding folk song before chucking reverb drenched vocals into the mix and exploding into a wall of noise and thundering drums by the close. The acoustic guitar strum (something of a first for M83) of Wait is beautifully orchestrated, carefully building layers and ratcheting up the tension as the song progresses. Gonzalez is in fine vocal form here, filling his voice with taut emotion and at times drifting towards a delivery that isn’t too far away from Peter Gabriel‘s.

Raconte-Moi Une Histoire finds M83 in a more positive state of mind thanks to some hallucinogenic frogs. The use of a child narrator could be irritating, but the innocence she brings to the song, and the wonderfully light orchestration that soars around the framework of a two note synth riff is hugely uplifting. Essentially it’s a paean to lost youth and innocence, which remembers just how much fun it is to exist within an imaginary world, either as a child or a serial abuser of hallucinogenic frogs. The piano balladry of Splendor keeps the theme of childhood innocence running, evoking a feel similar to those conjured by the pure vocal harmonies of The Beach Boys or the tinkling wonder that The Flaming Lips inject many of their songs with. Beautiful it may well be, but there’s an undeniable sense of sadness that runs through the melodic progressions too. This sense of melancholy can also be found in the hearts of Soon My Friend with its tumbling guitar motifs and aching strings, and My Tears Are Becoming A Sea which juxtaposes triumphant cascading orchestration with barely disguised raw emotion.

Perhaps the most thrilling moment of the album comes right back at the start with Intro, M83’s collaboration with Zola Jesus. A phenomenal exploration of electropop, it burns slowly from its Vangelis inspired opening moments into an engulfing wave of sound. The choice of Zola Jesus as a guest vocalist is inspired as her wonderfully off kilter tones wrap around Gonzalez’s voice perfectly. The instrumentation layers up perfectly creating an unstoppable rush that builds to an almost spiritual crescendo.

Although there is a raft of incredible material to be found across this far reaching album, there are occasional dips in quality. Most notably, these are found in the instrumental asides that punctuate the running of the album , essentially they’re kernels of ideas that never quite flourished fully. The likes of Where The Boats Go hark back to the ambient, almost shoegaze sound found on M83’s earlier work. Their fleeting nature seems out of place, as if written for a different album entirely and they tend to disrupt the flow of the album considerably making for a somewhat disjointed experience. Similarly some songs don’t quite feel finished or run out of steam unexpectedly. Soon My Friend is guilty of this, building towards a crescendo that never comes and spluttering to a halt disappointingly. The Laibach-lite pomp of Echoes Of Mine and electro ambient wash of Klaus, I Love You provide a rather unspectacular conclusion to the album, a problem only resolved by the quite striking orchestration of Outro which rises like a triumphant phoenix from the flames.

Hurry Up, We’re Dreaming may have its flaws, but minor niggles aside it is a testament to the fine songwriting skill of Gonzalez. It possesses some of M83’s most varied material to date, yet still functions as a coherent body of work. The curse of the double album is certainly present, but never really threatens to make Hurry Up, We’re Dreaming a sprawling, unlistenable mess.