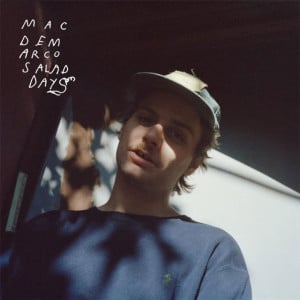 Mac DeMarco is a cool dude. He’s currently bobbing between ‘cult favourite’ and ‘genuine contender’, a place you could have found Kevin Parker three years ago, before he started hanging out with The Flaming Lips and making stadium-sized blasters like Elephant and Feels Like We Only Go Backwards. DeMarco has found his megastar buddy in Odd Future’s Tyler, The Creator, and it was reported, and subsequently verified with photos, that they were recording together.

DeMarco isn’t a greenhorn – he’s been recording and releasing raunchy rock ‘n’ roll for five years, first under the great pseudonym Makeout Videotape, and now simply as himself. Salad Days is his third release for Captured Tracks, after the album-sized EP Rock And Roll Nightclub, and subsequent album-sized album 2. For the uninitiated, he’s like a bluesy Ariel Pink, an artist unafraid to blurt out incredible tracks with amazing proficiency to vast swathes of acclaim but not knockout sales. DeMarco probably doesn’t give a shit about either.

Back to Salad Days, and boy what a record this is. The album opens with the title track, which has eerie, pleasant echoes of Phil Spector-era John Lennon or Hunky Dory David Bowie in its simple, jangling psychedelic appeal. The cymbal crashes and twinkling guitar line frame Mac’s breathy tones perfectly, and his mantra of ‘act your age and try another year’ is a humdinger.

Blue Boy is a sunny chill-anthem. Imagine Bradford Cox’s happiest moods, add extra THC and you’re nearly there. It showcases DeMarco’s tender timbre and chiming guitar, which are two of the freshest sounds around this year. Brother has a tasty guitar flavour and a night-drive radio-rock aesthetic, before it becomes completely enveloped in hazy blowout psychedelia around the three minute mark. Let Her Go is a lot tighter, and glassy guitar bristles and a smoky vibe sit nicely with the pastoral feel of the track. The lyrics about heartache and a spoken section are cool, as is the sibilant production on the cymbals. Goodbye Weekend finds Mac doing his best Marc Bolan croon on top of a honky-tonk stoned-funk cut, and a wobbling bass-line underpins the whole deal.

The next track Passing Out Pieces is a skewed, oddball rocker, while the stoned-on-the-beach vibe comes back with a vengeance on Treat Her Better. Chamber Of Reflection opens with a thunderous drumbeat that threatens to turn into When The Levees Break at any moment, before cheap-sounding synths pierce the haze, and Mac’s sexiest Scouse vocal flavour comes back to seduce your aural pants off. Go Easy’s slinky air and chiming chords are a treat. The album closes with a cool instrumental called Johnny’s Odyssey, which opens with a cheeky guitar lick and develops into a retro-slacker chill-out cut. The tasty Paul McCartney-ish wobbly bass-line boogie is an added bonus too.

Adam Granduciel’s The War On Drugs have already made a mind-blowing radio-rock record this year using the forgotten ’80s classics as a template. DeMarco reaches further back to the hazy, coked-out period following the Summer of Love for this, his no-doubt breakthrough effort. This record places him directly between Axxa/Abraxas‘ red-eyed sunshine psych and Granduciel’s red-eyed weep-pop. He’s the kind of dude you want to hang around with, one who spends all day in the same clothes he was wearing yesterday (or the day before that…), chain-smokes cigarettes and chain-drinks Dr Pepper and only sits up to receive the lit zoot you’ve dropped in the ashtray in front of him. Basically, Mac comes across as a winner at life. And you can bet he’s got a killer record collection.

The guitar sounds throughout Salad Days are pristine, the lyrics sublime and the vocals… the Lennon-isms are often befuddling but they can only be applauded. It takes a big set to solicit comparisons to The Greatest Songwriter Of All Time. It could have ended terribly, but you find yourself thanking God for Mac DeMarco’s huevos masivos. Oh, and keep listening at the end for a little easter egg.