The Maccabees – Marks To Prove It 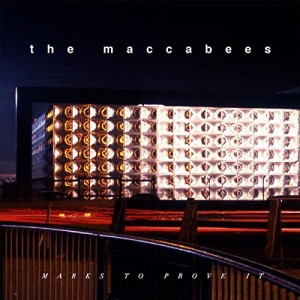 Albums that are essentially love letters to London are relatively commonplace, but it’s doubtful any band has written a long player about Elephant & Castle before.

The southern end of the Bakerloo Line has been undergoing something of a transformation lately. It is one of London’s less likely property hotspots, the old (but rather striking) tower blocks pulled to the ground to make way for the new dawn. The riots of Walworth Road seem a long time ago, as what was once seen as a blight on the South London landscape is now on its way to becoming one of the capital’s more desirable areas, following in the footsteps of neighbours Peckham and New Cross.

Why the geography lesson? Because The Maccabees have experienced a similar upward trajectory to the area in which they are based. Often written off as indie also-rans, they have arrived at album number four, three years after a Mercury nomination for the majestic Given To The Wild. Elephant & Castle is where their recording studio is situated, and the video for their lead single, sharing the album’s title, captures the roundabout in its 24-hour chaos.

Marks To Prove it, the album, looks to do the same on an expanded level, and largely succeeds – but does not prove to be an easy listen. This music is often busy to the point of restless, at times feeling unsure of the statement it is making. Big choruses come and go but there is an emptiness right at the heart of The Maccabees’ world, a darkness never fully extinguished.

Orlando Weeks’ lyrics frequently bring this to the surface, and although he has spoken of their deriving from overheard conversations at the cash machine, they leave a strong aftertaste. Kamakura finds him “drinking when you’re drunken, to chase down the evening”, the subject running away from demons inside his head. The music settles on an unexpectedly beautiful chord towards the end of this song, as though peace is within reach, but as the drum track builds it swiftly cuts off, leaving something even more important unsaid, hanging on the air. Pioneering Systems repeats this frustrating trick towards the end of the album.

There is more. “You’re not getting any younger,” warns the barbed chorus of River Song. The band’s demeanour suggests this should be a big, singalong moment; the lyrics protest otherwise, and the trumpet solo beginning Slow Sun, while it may portray the beginning of a new day, feels desperately empty afterwards. The final Dawn Chorus finds Weeks “breaking up to make it better”, at which point the baleful trumpet returns.

Spit It Out is far more affirmative, and leaves a lasting impression. A sonorous piano intro cuts to some of the best music here, kicked through a wall of distortion and leaving an impact similar to Arcade Fire’s biggest songs. “It’s gonna get easier somehow”, promises Weeks. His words come true in the following Silence, effectively the end of side one of the album, but are thrown out again by Slow Sun, featuring the voices of early morning commuters who are “old enough to know better”.

There is a curious conflict at work here. The band have often stressed they do not aim for stadium venues, yet they are making music that responds to the surround sound treatment and positively reeks of a huge arena.

Add this to Weeks’ lyrics and listeners may be left confused. It is a brave statement to make, for sure, and one that confirms how far The Maccabees have come, but Marks To Prove It remains oddly unsatisfying. Maybe we should return in a couple of years or so, once the regeneration project is finished.