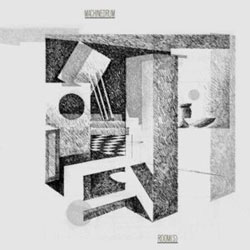 Some electronic music is cold and detached, some is imbued with a human warmth. The music of Travis Stewart, aka Machinedrum, is dark and punishing. The cut up vocal samples will have many writers reaching for obvious comparisons with Burial, but the reality is much more complex than that. The Planet Mu press release describes this music as ‘sun kissed and impressionistic’. This seems off the mark, as even track titles such as She Died There and U Don’t Survive might suggest. Stewart already has six albums to this name, but this is his first release for Planet Mu – and, in spite of its uncompromising nature, it may still be the one to bring his music to a wider audience.

There is little here that could be described as celebratory or euphoric, although it’s certainly characterised by a relentless energy. This energy seems manic, sometimes unhinged – and there’s a real sense of a drive to escape from a restrictive, claustrophobic environment. Like much of the post-dubstep musical landscape, Stewart looks back to the sounds of UK garage for inspiration, but these soulful cut-ups are put in the service of a much more intense, less accessible purpose.

Perhaps the most transparent quality on Room(s) is the elaborate nature of Stewart’s beats. The effect on She Died There is disorientating and confusing, no doubt intentionally so. The bass frequencies are often enhanced to an overpowering level – it is the kick drum, often unusually synopated, that is often the most prominent and effective sound. It is refreshing to find electronic music moving so defiantly and adventurously away from a basic four-to-the-floor template.

Gradually, the ear grows accustomed to Machinedrum’s sonic approach. By the end of the album, percussion has disappeared completely – but it somehow sounds neither incongruous nor unexpected. Over the course of the set, the rhythms have been subsumed within the overall wider purpose of the music. The final, wistful Where Did We Go Wrong offers a moment for reflection.

Stewart’s great skill here is to take some transparent influences – the footwork and juke scenes, UK garage, Chicago house (such as Farley Jackmaster Funk) and make something new and distinctive from these core ingredients. The music here has a coherent approach – a breathless energy and frantic pace – but this is also music of great depth and variation. Whereas much of the album is full of tension and suspense, Come1 (the centrepiece of the album), is a piano-house inspired moment of sweet relief, although still unwaveringly intense.

Stewart is so liberal with his use of vocal samples that they become textural brush strokes rather than hooks or entry points. It is a contemporary approach to the use of the human voice primarily as an instrument. Yet it is the rhythmic adventure of this album that helps distinguish Stewart from other footwork artists, or even from his UK bass music inspirations. Room(s) is both evocative and threatening – a place of danger and thrill.