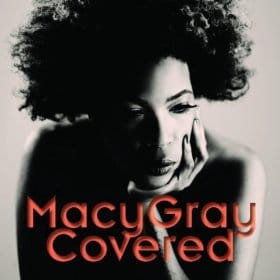 It wouldn’t be harsh to state that Macy Gray‘s days as a commercial concern are over, at least on this side of the Atlantic. She hasn’t had a Top 20 album here in nine years, and while her sales have been respectable Stateside, her last album, the somewhat ironically-titled The Sellout, which saw her take commendable risks, barely even made a dent in the UK charts upon release. One doubts that she minds all that much, though; she’s probably interested in broadening her horizons just because she can. It may be quite some time since I Try, not to mention its parent album On How Life Is, launched her career, but not only is she still going strong after 22 years in the business, she’s discovered a playful streak.

As the name Covered suggests, on her sixth studio album, Gray reinterprets other artists’ material, but rather than play it safe and stay well within her comfort zone, the album is, in some ways, the logical next step after The Sellout: Gray doesn’t opt for mere pastiche, but instead decides to broaden her horizons even further and approach the songs chosen for the album in her own inimitable style. The results are surprising in a number of ways, and a quick glance at the track listing will hint at why; she covers Arcade Fire (Wake Up), Kanye West (Love Lockdown, segueing it into Buck by Nina Simone while she’s at it) and Metallica (Nothing Else Matters), among others. She even has the guts to take on My Chemical Romance‘s Teenagers and actually make it work. Her reimagining of that particular song is worthy of note, as she imbues it with a confident swagger that is even more pronounced than it was on the original version.

There’s confidence in evidence all over the album, in fact; opening with a fragile and wonderfully affecting rendition of Here Comes The Rain Again by Eurythmics, there is a definite sense that Gray has attempted to challenge herself, and some of the choices sound particularly inspired. Only two songs in, the bar is raised even higher by a dazzling cover of Radiohead‘s Creep, stripping away the self-loathing veneer of the Oxford band’s ‘Scott Walker song’ and focusing on its anthemic qualities; there’s something humbling about the way she sings “I wish I was special” on one of the album highlights. When she’s on top form, she is indeed a cut above the rest.

If Gray had simply included the 11 covers that make up the bulk of the album, Covered would have flowed very well indeed – it helps that the standard of these covers is very high. However, she insisted on including a number of ‘skit’ tracks. They may be quirky and genuinely funny at times (she pokes fun at her biggest hit and gets advice from Nicole Scherzinger on how to sound more like Alanis Morissette), but there’s a time and a place for everything, and things like that are best left on the cutting room floor. This album knows exactly what it wants to be, for the most part, before it decides to play with fire and gets badly burned. The skits hurt the album’s flow so much that, no matter how good the material surrounding them is, one can’t help but feel slightly cheated. Covered had the makings of something great, but ends up sounding far more uneven than it should have.