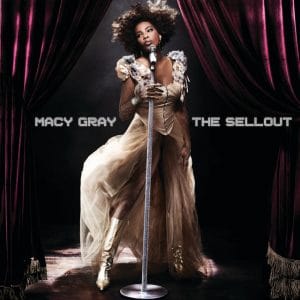 It must be hard being Macy Gray and knowing that every new album is compared to the high standard set by her 1999 debut On How Life Is, for none of her albums have since topped that. Certainly not 2007’s Big, full of trendy collaborations that upstaged her personality and hence flopped.

When Gray first burst onto the scene with her raspy voice and unique personality, she became a superstar almost overnight. But the artist who went on to sell 15 million albums and win countless awards sank just as quickly. Maybe because she took her goofy image a bit too far – her downfall began with a self-promotional stunt gone wrong at the 2001 MTV Video Music Awards when she showed up with a dress bearing the words “Buy My Album” – and never fully recovered. But now she claims she’s herself again. A paradox since her new album is called The Sellout.

Gray pours her heart out and shows her tenacity as she kicks off with the title track with straightforward honesty: “This is my gimmick… I’m sellin’ out.” She is Macy Gray, she once had an image and isn’t afraid to explore that once again. Her self-awareness continues on the dance-flavoured Lately, where she basically admits she didn’t know she had it so good but has now “landed back on her feet.” An epiphany for her – and us.

Rock makes a discreet appearance on the radio-friendly Kissed It, which boasts a collaboration with ex-Guns N’ Roses members Slash, Duff McKagan and Matt Sorum, whose presence is barely there. While it has rock undertones, it would have been more interesting if they had pushed that register a bit further. With her whiskey voice, Gray would sound great on a grittier, guitar-laden track. Another notable collaboration is her duet with Bobby Brown on the vapid Real Love, thus assuring her of plenty of airplay.

But she’s at her best when she is soulful, like on Help Me, a ’60s-style soul track crossed with gospel which gives Gray an edge she so needs; she is in her element, and she answers to her naysayers: “Who are they to say who I should be and where I’m going.” That Man takes yet another turn for Gray. It is a fun, savvy mélange of doo-wop, circa Austin Powers period, and ’70s soul.

On a final note, The Comeback announces her return: “Hey big world, it’s me again/I’m coming way back to be big again.” But while there is plenty of soul in the sound, there is a lack of body in both delivery and melody. The former is devoid of the eccentricity that is part of her appeal and the latter lacks grasp. And while the syrupy sentiments and self-analysis peppered throughout may be part of her renewal, this is hardly a renaissance.