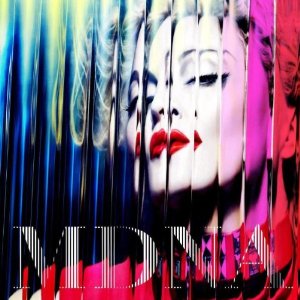 “There’s only one queen, and that’s Madonna, bitch,” quips Nicki Minaj on I Don’t Give A, a track that, in its tantalising incomplete titular provocation, very much stands as a mission statement for what MDNA seeks to do as a whole. Because, quite frankly, when it comes to pop sovereignty, there is only Madonna, and here, she casts cares and judgement aside to produce some of the most energetic, vital-sounding music she’s delivered in years.

Perhaps what’s most striking is that, for all the hype that the involvement of Ray Of Light and Music producer William Orbit has generated, the majority of its best moments come in an explosive opening salvo from Benny Benassi and The Demolition Crew.

The first of the Benassi tracks, Girl Gone Wild, looks back to Confessions On A Dancefloor, sidling up close to the likes of Get Together for a sleek commercialism that comes out effortlessly as the sound of ‘now’ in a way that Hard Candy, with its penchant for aping faux urban credibility, never did. Gang Bang is exceptional; a filthy, lewd slab of thumping bass that harks more to Erotica in its breathy, foreplay-like vocals. It’s Madonna playing the tease, and on MDNA, she’s somehow achieved the rejuvenative effects to pull it off. As a dance record, it excels, often simply because it does what it does with such unbridled confidence, of the kind that could only ever stem from Madonna. From the police sirens to the warehouse party vibes of the deftly inserted dubstep middle-eight, there’s an allure of the naughty and the lawless, a promise of intoxicating pleasures backed up with Madonna’s open admission: “I’m going straight to hell.”

Likewise with I’m Addicted, Madonna seems to have hit upon the most important element of MDNA and her continued persistence as a relevant pop star: creating music that makes people feel good. Bass explodes likes an atomic volcano, burbly techno synths splice across like something off Daft Punk‘s Tron soundtrack – everything about the opening handful of tracks on MDNA is about unadulterated enjoyment in its purest of forms. Refreshingly, Madonna realises her place within these tracks too, content where needs be to employ her voice merely as a tool like any other instrument – there’s no strained showboating, just clinical insertion and delivery.

While furthering the playful exuberance, Turn Up The Radio repositions Madonna as the American Queen triumphant with the aid of a properly classic ‘Madge melody’ that echoes her ’80s greats. It’s the album’s obvious ‘big’ radio hit, its airwaves-optimism and carefree abandon writ all over it. Madonna’s lyrics of “I wanna go fast and I’m gonna go far” might be inelegant and overly blatant, but it’s in a plain, honest, doesn’t give a damn way. Confessions, for all its many merits, often felt shrouded in mysticism and introspection, but Turn Up The Radio touts a more blithely spirited way of existence; a readiness for the open road and life in all its assorted majesty.

Superstar is equally sublime, like a Ray Of Light for a new, glorious generation. In its refrain of “Ooh la la, love the way that you are” and the sheer prettiness of its chorus hook it somehow preaches a message of acceptance better than the likes of Gaga ever could. Along with I’m A Sinner, it stands as the album’s ‘rock’ moment, with the latter also canvassing classic Orbit tropes – tribal beats, celestial, chiming synths – to rapturous effect. Even when Madonna gets all religious – “All these saints and holy men, catch me before I sin again” – there’s a sort of knowing playfulness, that this time round, everyone’s in this together. Indeed, with the inclusion of the Nicki Minaj and M.I.A. guest slots, beyond the obvious attempted investment of a certain youthful hipness (which to a degree they help pull off), there’s the notion of sisterhood, of unity; as electro-cardio workout Some Girls helps hammer home with aplomb. Throughout MDNA, Madonna paints herself as the woman supreme, the master article to which every listener, for the duration of the album, is part of.

Of the slower numbers, Masterpiece feels like something of a let down. In its own right it’s a perfectly solid, dependable Madonna ballad, but after the break-neck intensity of the rest of the album, it feels oddly out of place. Indeed, there’s the sense that divorced of its original W.E. soundtrack setting, it’s a bit of a fish out of water, something that Falling Free thankfully manages to avoid. With what’s easily Madonna’s strongest vocals on the album, it’s like a trippy, stripped back re-kindling of Drowned World replete with piano and strings that swell with a synthetically crafted fidelity. There’s an air of sumptuous epiphany as Orbit’s production gently eases down from the higher gears, leaving an impression of Madonna definitively reasserted as Queen and mother superior. MDNA is her delicacy, her treat to the assorted masses whose interest was in urgent need of recapturing. Perhaps that is MDNA’s greatest virtue then, the fulfilment of that urgency, the satiating of that desire. Because when it comes to partaking in pop, MDNA has easily set itself out as 2012’s go-to drug of choice.