by Max Raymond
published: 30 May 2013 in Album Reviews
Tweet 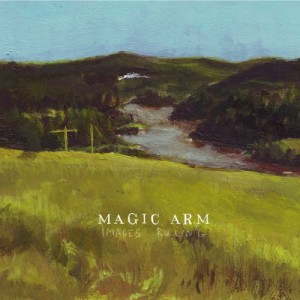 On the face of it, in the seven years since his arrival it would seem that not much has changed for Magic Arm, aka Marc Rigelsford; the Manchester-based musician is still doing everything by himself. But his tunes have slowly evolved into music that blossoms with all the power and force of a full band. And picking up the approval of Grizzly Bear‘s Ed Droste and Iron And Wine‘s Sam Beam won’t have hurt his career trajectory.

His debut LP, 2009’s Make Lists, Do Something, was well received to an extent, even if some were left a little disappointed by its inconsistency, but its flaws are more noticeable when compared to follow-up Images Rolling. The new album attempts to marry infectious pop hooks with its own idiosyncrasies, and in so doing manages to sound like a melting point of ideas. These are 10 brand new songs from Rigelsford that all sound different from one another and, as the album progresses, he continues to throw in more instruments and textures; just when you think he can’t add more, he does.

This is something that works both for and against him. Put Your Collar Up is a four-and-a-half minute opener full of flair, with a vibrant melody that bounces along, whilst the delightful Tonight I Walk is a slice of understated pop joy. But there are still moments of filler that not even his many textures can hide; You Have Won is pretty forgettable and Lanes, albeit nice enough, isn’t something to come back to again and again.

Elsewhere though is some of Rigelsford’s best material to date. Warning Sign uses the Beck-esque approach that his worked for him before, creating a seductive and dreamy song that’s heavy on spacey synths and brass. Under The Eaves sees him finally deciding to aim high, starting stripped down but ending in a cacophony of hard-hitting drums and whirring psychedelic organ sounds. His vocals do a pretty decent job of standing up to his sonic creations, and they get a chance to properly shine on sparser numbers such as the elegant closer, The Flood.

Throughout recent music history there have been solo artists who have attempted to cram in as much as possible and show off as much skill as they can, but have fallen short; instead of being viewed as craftsfolk they’ve been written off as quirky and nothing else. To put Magic Arm in such a cachet would be a touch unfair. Images Rolling is undeniably focused on experimenting with different sounds, and it doesn’t work all the time. Yet there’s more to it than that. Somewhere in this eclectic mix is a talented songwriter bursting to get out and show the world what he’s really made of. And with Images Rolling he has made an intriguing and, at times, inventive step up from his previous work.