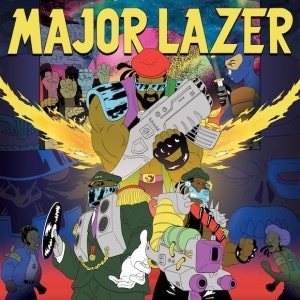 After the success of debut Guns Don’t Kill People… Lazers Do, and the departure of creative partner Switch, Diplo has serious plans for this project. “I’ve made enough songs about getting money or fucking bitches,” he’s decided, declaring his intention to make “a concept album about freeing the universe from mental slavery”.

Which is fine, except that Major Lazer is a Jamaican commando cyborg who lost his arms in a secret zombie war, and turns up to parties on his rocket-powered hoverboard. So it’s a noble sentiment, but one that seems a tiny bit incongruous under the circumstances. Major Lazer was always about bringing authentic dancehall to a wider audience, thrilling to the melange of inventive beats, crazy synth sounds, dirty lyrics, and staggeringly obscene dancing. It was music in technicolor.

And yet the first three tracks on Free The Universe are pastel at best, and monochrome at worst. You’re No Good hints at invention with some Beach Boys xylophone, before slipping into a mid-paced beat and lackadaisical crooning; Jet Blue Jet feels like an inferior Pon De Floor remake; and the five minutes of slow reggae jam that is Get Free – while featuring some intriguing hooks – is the last thing the album needs at that point. So when Jah No Partial takes it up a notch, like the moment the everyone turns into a vampire in From Dusk Till Dawn, it’s a blessed relief. Except that on second listen, it just sounds like Pendulum.

It picks up from that point on, but too often, the album is stalled by Diplo’s yearning for commercial success, or (worse) sincerity. Keep Cool is a nice enough song, with a poised, classy vocal performance from Wynter Gordon, but sounds utterly conventional in this setting. And instead of continuing to mine the Jamaican scene for little-known gems, the album is studded with mainstream stars – Wyclef Jean, Bruno Mars, Shaggy, Ms Dynamite, and Peaches all crop up to subtract credibility from the project. Mr Jean’s contribution, Reach For The Stars, is the most egregious example, taking an Eagle-Eye Cherry chord sequence, slowing it down, and adding trite inspiration lyrics about “if you can see it you can be it”.

It’s not just that such songs sound dull next to the superior day-glo dancehall of Sweat or the other-worldly tones of Vampire Weekend‘s Ezra Koenig on Jessica; it simply sounds wrong to go from “Reach for the stars, I know you can get there one day” to “I ate the pussy so fast I’m ’bout to start burping” in the space of a song. It’s a pity, because when he gets it right, Diplo can still conjure up those vicarious thrills; Watch Out For This offers up a fabulous fanfare hook that heralds a warning not to “fuck with the yardies”.

So it’s make your mind up time. Credibility, or cracking the charts. Booty, or inner beauty. Ending mental slavery, or employing an artist who describes lesbians as “two Sodomites who should be dead”. There are the seeds of two worthwhile projects here, but no chance of them ever uniting under the Major Lazer banner. Time for an honourable discharge.