Major Lazer – Music Is The Weapon 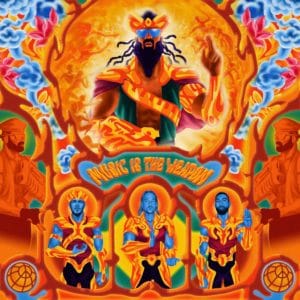 When Major Lazer was founded by producers Diplo and Switch, the goal was simple: create innovative, hooky Caribbean-flavoured electronic music with plenty of guests, energy and humour. Switch left after their brilliant debut album, and since then Major Lazer has gradually become ever more similar to the rest of Diplo’s output, with many of the specifications above morphing into optional extras.

Music Is The Weapon is presumably intended as a semi-sequel to 2015’s Peace Is The Mission, and shares some of its inclinations to straightforward pop. Opening track Hell And High Water with Alessia Cara is a prime example, with its smooth, conventional chord sequence and distorted drop melody, high on production values but low on memorability. Bam Bam featuring French Montana and BEAM generates more interest with its erratic synth lead, moombahton rhythms and sexual lyrics (“Baby get ready ’cause the ting heavy / bounce, bounce like the ’96 Chevy”), even if French Montana’s contribution amounts to a whole heap of nothing.

The decision to feature Marcus Mumford of Mumford & Sons on Lay Your Head On Me is baffling but not disastrous, as a soulful guitar lick dances around earnest vocals about honesty and intimacy. Trigger featuring Khalid is woefully boring, his low-key delivery rubbing up against sludgy chords and a weird mixed metaphor in the hook (love is a drug, she is shooting him, is this about a drug deal gone wrong?).

Rave De Favela is by far the best track of the record, with hard-edged 4×4 beats, novel sound design, infectious syncopation and lively performances from MC Lan, Anitta and BEAM. In a record where most of the songs are under three minutes in length, this tune really deserved to be longer, and it’s a reminder of how exciting Major Lazer can be when they put their minds to it.