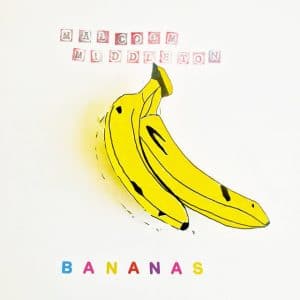 How much of a connection should pop music have with everyday life? For Malcolm Middleton, music is the opposite of escapism. With so much modern music processed within an inch of its digital life, it is therefore wholly refreshing to find Middleton and his accomplices in the studio singing of day to day fallibilities.

Bananas is the singer-songwriter’s most direct and confrontational record yet – but not in a musical sense. The music itself is a comforting and often uplifting presence, upward looking in its trajectory and beautifully shaded, subtleties revealing themselves through flowing piano or busy guitar. The musicians themselves, including King Creosote and Jenny Reeve on backing vocals, are on top form.

Yet it is in the lyrical content where Middleton really hits home, looking in the mirror (so it would seem) to confront some demons with an unflinching gaze. He does this in such a way that a smile comes readily to the listener’s face; for Middleton’s wry observational powers are still at their height, delivered in his winsome Dumfries burr. “There’s nothing worse than a successful Scotsman, as he writes into his book,” he sings on Twilight Zone, a songs whose day to day mundanity is all the more touching for its airy musical setting. “Fuck off with your happiness,” he delivers with brio on Love Is A Momentary Lapse In Self-Loathing.

Not for him the pretence that life is a breeze, needing no mental strength. Instead he presents us with an album of nine songs that dig in for genuine, hard-fought positivity. Laying his cards on the table with first song Gut Feeling, he tells of the “rows and rows of naysayers, marching with the vampires, a troupe of doubting Thomases in my mind”.

Often the struggle is inspirational. On Buzz Lightyear Helmet, it’s ok for him to say “everything is gonna be alright, but today I’m feeling shite”. This song is the album’s most ambitious, an eight-minute suite of distilled feelings and contrasting musical styles whose common denominator is its frank declarations. ‘We’re gonna have fun fun fun on the East Coast!’ he proclaims, and though it may be a dead pan delivery, he clearly means it.

There is a stark underside though. “Ever so lost and lonely, give me some company,” he sings over an electronic beat on Man Up, Man Down. Then, on Salamander Gray, he closes the album with a deeply affecting song where the coda speaks repeatedly of the “pain in my heart”. The music, however, speaks of the strength within to ease it.

Life is a struggle for many people, and Bananas – the title no doubt representing a perceived mental state rather than the fruit adorning its cover – addresses this head on. Loneliness is a problem for many in the face of the digital onslaught we face in modern life, but with Middleton he is there in the room, consoling the listener that he feels the same, but offering a positive approach.

These elements combine to make Bananas the equal of his finest work to date, and it deserves a listen and an admiring glance from all for whom life can be a struggle. It may not break new ground in a musical sense, but this is pop music with the strongest possible connection to everyday life.