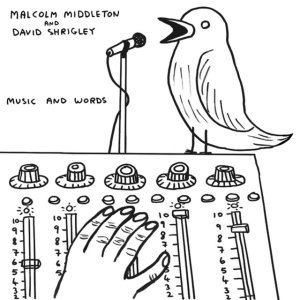 The idea for Music And Words was sketched out (most likely in black inky scribbles) more than seven years ago when David Shrigley worked on the cover art for Malcolm Middleton’s A Brighter Beat. They found that they both shared common ground and creative inspiration; namely “darkness, pathos and despair”. However, what saves this album from being a truly bleak and miserable affair is the pair’s ability to take those driving forces and craft songs that are crude, obscene, unsettling, and above all, curiously amusing.

Perhaps what is most impressive about this album is the way in which the pair has managed to make a clutch of songs that are in some way reflective of Shrigley’s artwork. By keeping the music relatively simple, Middleton provides a varied but basic canvas for each of these monologues. For Shrigley’s part, the words are equally simplistic, which allows the ideas contained within these narratives to form pictures in the mind easily.

The addition of guest “vocalists” (mimic Gavin Mitchell, Scott Vermeire and actor Bridget McCann all play their parts perfectly) alongside Shrigley allows for a range of characters to inhabit this most peculiar album where basic songs and words combine to create bigger ideas, and concepts. For example a cuddly woodland nursery story about a rabbit and a playful squirrel quickly escalates into a full scale war and plague that by the conclusion has the entire cast of Duncton Wood begging for death and questioning the point of existence.

Not of course that this is an album that is intended to search for some kind of existential answer. There are times when the pair revels in top class swearing and knob gags. Yes, it’s base level humour, but so what, it’s simple and very, very funny. Opening with A Toast, the level is very quickly set. Against a simple electro backing, the album offers a warm welcome with its opening line “Greetings, and good fucking wishes to you and your fuckhead, arsehole family”. From there, it goes downhill rapidly, unless you’re one of those people that enjoy gratuitous swearing and insults. If you are, then Sunday Morning will also appeal. Initially Middleton believed Shrigley had written a critique of religion, but in reality with a central refrain of “bong your dong upon the gong”, it is a celebration of penis/gong interfacing.

A simple drum pattern accompanies a description of a naked man with a hairy bottom who the narrator thinks may have escaped from a mental hospital. It’s delivered in a similar fashion to one of Jerry Jackson’s investigative cartoons. If the description of the naked, walking mental patient seems amusing (it is) then Dear Brain explores mental illness with care and poignancy. Set to a plaintive piano refrain, lines like “Dear Brain, I know that you are lord of everything that I do… but oh, dear brain hear my request, that you stop making me say things that I don’t mean, and that you stop making me do things that I don’t want to do” pack a significant punch. The Sean Connery styled character who admonishes the “mental case” on Touch My face would perhaps be a little more sympathetic had he heard Dear Brain rather than encouraging police brutality.

Caveman encapsulates Music And Words perfectly. It starts out as a daft poem about a caveman that chews on bones, lives in a cave and kills girls with a stone. At first it’s just a silly playground chant but once Middleton adds some evocative post-rock tinged accompaniment and the words are recited in a dour Scottish drawl, the idea of a Caveman murdering a bunch of girls with a stone suddenly becomes horrific. Shifting perspectives and clever juxtapositions are all over this album, Middleton and Shrigley have created an album that on the face of it appears to be simple, but there’s untold depth here, as well as some endlessly creative swearing.