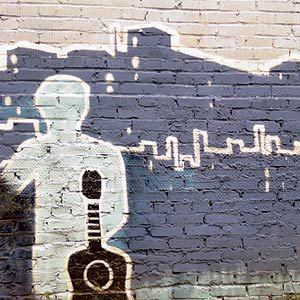 Described by its creator as his ‘third-and-a-half’ album, Sleight Of Heart intentionally brings what Malcolm Middleton views as his ‘boo-hoo/way-hey!’ period to a close.

Initially conceived as a record purely with acoustic guitar, the record once again brings across Middleton’s stock values of intimate asides, barbed humour and charming sentiments, occasionally presenting all three qualities in the same sentence.

For what is essentially a rounding-up of outtakes and cover versions from the Brighter Beat sessions, Sleight Of Heart has a pleasing sense of structure and not a sense of filler. This despite an unexpected Madonna cover version, as Middleton takes on a rather stark version of Stay, nothing held back. Contrast this with a rather brighter and more energetic King Creosote cover, Marguerita Red, beautifully delivered.

Lyrical gems abound, delivered in Middleton’s instantly recognisable Falkirk tones. Blue Plastic Bags is the pick here, observing on its way home from the off-licence that “staying in is the new going out”, with a six pack of lager, a bottle of wine and some tomfoolery all that’s required. As a shot at British drinking culture, it’s right on the money.

And yet in the following Total Belief, “this is shit, and that is shit, but being shit is great”, as the singer enjoys a humble aside. Middleton might not obviously crack a smile in the course of his work here but there is a certain contentment that comes across, the feeling that even when he’s railing about things the fact he can do so with his guitar makes him happy.

And the guitar is often all that’s needed, with the occasional violin part adding a nice folksy edge, either to Stay or the breezy opener Week Off, where the end of a long party brings a blissful repose. Here the band is fullest, with Mogwai‘s Barry Burns on piano and the ex-Delgados drummer Paul Savage in attendance. Said violinist Jenny Reeve also adds backing vocals where appropriate, but this is Middleton’s one on one with the listener, and is best listened to in that way.

It will be interesting to chart Middleton’s next move, the implication being that even he doesn’t yet know where his music will take him. What we can be assured of is that his expressions through music will continue in a strongly poignant, intimate way – and that his canny songwriting will once again win through. It does here.