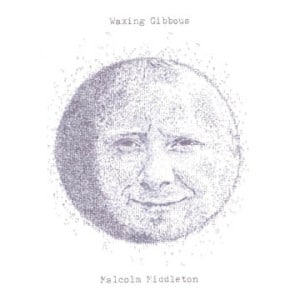 He’s been labelled something of a miserablist by the music press, but is this really a fair tag to dump at Malcolm Middleton’s door? On the evidence of the most recent offering from the prolific Falkirk singer/songwriter, it’s a label well out of date.

For sure some of Middleton’s lyrics are not upward looking, but even when that’s the case there is an underlying positive conviction. The way Red Travellin’ Socks bustles in suggests a man on a mission, rather than someone stopping to navel gaze, and it’s a bustle that keeps on through the record, even when Middleton does stop to take the chance to think.

Before you ask, a ‘Gibbous’ is a puffed-out phase of the lunar cycle, describing the moon as it looks somewhere between its half and full phases. As far as Middleton is concerned, it’s definitely more half-full than half-empty, so that even when he sings “rain is coming down, and I don’t know what to do” in Kiss At The Station, he sings of a romantic dilemma rather than an extended bout of soul searching. And when the song reaches its exultant bridge passage, the listener is swept away with the possibilities.

As ever from this source, the songs are neatly crafted, with a touch of folk music added to their melodies, not to mention the instantly memorable and quotable lyrics. Their author delivers them against a rather more expansive backdrop than that used on previous record Sleight Of Heart, whilst the tempo is quicker. While on that record’s Blue Plastic Bags he sang about staying in being the new going out, the impression here is he’s tired of all that – and wants to get out and travel some more.

Even the sparsely textured asides, such as Carry Me or Stop Doing Be Good, have at their core a positive and upward looking message. The former is a moving song, its “pray for my soul” couplet broken up by wry spoken word asides. “Every day I checked for my superpower or special ability,” speaks Middleton, “but it’s still in the post – I know it is.”

At the time of writing a leading retail site, who shall remain nameless but who can be reached by one click from this page, were listing Middleton’s new album with the main artist as the ‘Middleton Congregational Church’. A slip of the drop-down menus, perhaps, but it’s an irresistible thought that such a body might sing Ballad Of Fuck All in multitracked glory. Perhaps when they do, Middleton will know he’s really broken new ground – but for now this is an upbeat, affirmative record, full of insight, humour and good tunes. Just don’t believe the doom bringers.