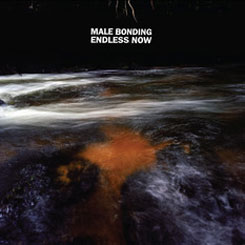 Endless Now sees east London trio Male Bonding return with their second album for the esteemed Sub Pop label. Their relationship with Sub Pop continues to be a natural and harmonious affair and provides confirmation that their sound has not undergone any radical change from that showcased on their debut album Nothing Hurts. Amongst the buzzing guitars however it is possible to detect small signs of improvement and fine-tuning, whilst it also boasts a greater melodic strength than its predecessor.

On the surface there is not a great deal to distinguish each track, an admission that may initially be a cause for concern. Their grungy American guitar sound is still indebted to bands such as Sebadoh, Hüsker Dü and The Descendents, although here it has been translated into a more overtly energised form of power pop that pushes them closer to bands such as Weezer. Essentially, what we get is a rapid succession of (mostly) sub-three minute blasts of exuberant, fuzzy guitars. It is all over in a pleasingly concise 37 minutes.

Tame The Sun is a strong candidate for an opening single, all jolts of guitar and powerful drum patterns, and is an accurate précis of what is to follow. Seems To Notice Now is another early hook-laden highlight, a strong melody residing under the barrage of guitars. Bones offers the first sign of something slightly different, tight percussion and driving guitars soon abetted by some dreamy, shoegazey vocals, which are at times reminiscent of early Ride. Indeed, a hazy exterior sheen is cast over much of Endless Now.

Elsewhere, a similar high standard prevails. Before It’s Gone features frontman John Arthur Webb delivering his disaffected vocals with a mild sneer while What’s That Scene sees their DIY ethic allied to some soaring melodies. Likewise, Channelling Your Fears has more choppy riffs set against a flurry of drumming and Mysteries Complete manages to be simultaneously both buoyant and lurching. Combined, they point to an improbable, nascent revival of early 1990s indie rock. The Saddle is unique in that both the pace and volume noticeably drop. While it shows a different facet to their sound, it equally proves this is not where the band’s real strength lies.

The time in between the release of their two albums has seen new bands such as Yuck and Veronica Falls appear, traversing similar musical ground. This may just be an indicator of how fast-paced, fertile and prolific the current music scene is but there is an underlying feeling that for their next album Male Bonding may benefit from looking further afield to expand and develop their sound. For how long they will be able to continue releasing album after album of adrenalin-powered, guitar-driven indie-rock may be up for debate. But for now however, such concerns seem premature and a little insignificant. A far better and more worthwhile proposition is to simply allow yourself to be swept along by the ensuing wave of energy and excitement that their music creates.