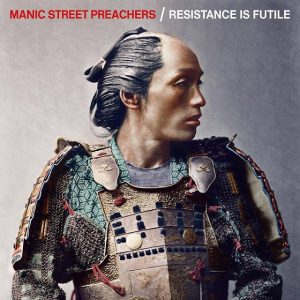 Considering they initially promised to just release one album and then split up in a blaze of glory, Manic Street Preachers have endured as one of the most prolific acts of the last 20 years. Yet, more than most bands, the Manics have undergone more than their fair share of enforced change since first exploding onto the scene in a blitz of eyeliner and Situationist sloganeering.

Resistance Is Futile is the trio’s 13th release, and despite their post-Richey Edwards reputation as a polished pop-rock band, they’ve bounced from genre to genre in that time. From the bleak scratchy rock of Journal For Plague Lovers (posthumously written by Edwards) to the breezy pastoral folk of Rewind The Film, they may not have consistently hit the heights of previous glories, but it’s a journey that’s never been less than fascinating.

The two albums that this new record harks back to are two of their most musically successful. Resistance Is Futile takes the simmering anger and indignation of Generation Terrorists and channels it into the kind of widescreen arena rock that Everything Must Go did so well. The result is the Manics’ most consistent album since Send Away The Tigers over a decade ago. There are several musical and lyrical nods to their back catalogue – Dylan And Caitlin, a duet with The Anchoress, brings to mind Little Baby Nothing, while International Blue, with its huge, spiraling guitar riffs, could be a sister song to Motorcycle Emptiness.

This isn’t the valedictory sound of a group preparing for retirement though – Resistance Is Futile sounds like a band refreshed rather than one last hurrah. The soaring strings of opening track People Give In act as a polar opposite to the bleakness of the lyrics: “people get tired, people get old, people get forgotten, people get sold” is how the song opens, and from here on it’s classic Manics – a stirring tale of the defiance and dignity of the working classes. James Dean Bradfield can still belt out a chorus with the best of them, too.

Liverpool Revisited takes that theme and runs with it. In 1998, the band closed This Is My Truth Tell Me Yours with SYMM (South Yorkshire Mass Murderer), a song about the cover-up of the Hillsborough Disaster, which is all the more remarkable given that it was recorded 14 years before the truth of that particular incident became more widely known. Liverpool Revisited acts as an upbeat tribute to the families affected by Hillsborough – a more upbeat, stirring anthem than the bleak SYMM, with talk of “dignity and pride, poetry and life”.

Distant Colours is also redolent of classic mid-period Manics, a huge sky-scraping chorus but showered in the sort of disillusionment and regret that only middle-age can bring. Hold Me Like A Heaven, discounting its rather clunky title, is even better – one of the best songs the band has written in many years, the sort of big, warm anthem that feels like a sonic hug while Dylan And Caitlin, about the tempestuous marriage between Dylan and Caitlin Thomas is beautifully written (“Love has deserted and made a fool and a drunk out of me, my wishes no longer may breathe”) and a great showcase for Catherine Anne Davies AKA The Anchoress, whose vocals blend perfectly with Bradfield’s.

For those who thought that the life of Manic Street Preachers was winding down to a conclusion (and, given the rather lacklustre nature of their most recent albums, you’d be forgiven for thinking that), Resistance Is Futile is a fine riposte. While there are a couple of misfires (Broken Algorithms is as messy as its title would suggest), this is generally a fine return to form from one of the country’s most treasured bands.