by Sam Shepherd
published: 7 May 2007 in Album Reviews
Tweet 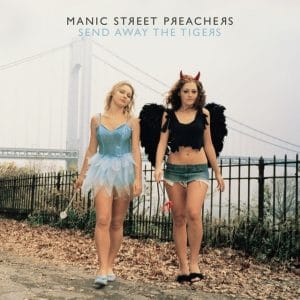 The clues are there before you even slide the CD into the drawer. The faked Cyrillic type-face that adorns the cover echoes The Holy Bible, Manic Street Preachers‘ last album to feature Richey Edwards.

Then there’s a quote from Wyndham Lewis: “When a Man is young he is usually a revolutionary of some kind. So here I am speaking of my revolution” that tells you every thing you need to know about this album. Send Away The Tigers finds the Manic Street Preachers rediscovering what made them tick as a band, and speaking of their revolution.

The last 10 years have seen the band meander into middle age with a series of increasingly lacklustre albums, culminating with the critically savaged Lifeblood.

When James Dean Bradfield and Nicky Wire both released solo albums, many saw this as a sign that the Manics were a spent force, but then many saw the band disintegrating after the disappearance of Richey Edwards and the band returned with Everything Must Go: an album that stands as one of the band’s finest achievements.

Send Away The Tigers does not ring the death knell for the band: if anything it shows a band filled with renewed vigour and enthusiasm. They’ve remembered what it means to be the Manic Street Preachers. Nowhere is this more evident than in the title track. A stadium sized tune that shows that the Manics have remembered how to rock at last – it couldn’t be a more finely tuned statement of intent.

Delve into the lyrics and you’ll find references to the war in Iraq, alcoholism, and the loss of Richey (a paraphrase of Tony Hancock’s suicide note appears in the first verse – something Edwards claimed was one of the most beautiful things he’d ever read). It’s typically oblique and full of bombast. That noise you can hear is a sigh of relief. Finally Manic Street Preachers are sounding vital again.

Underdogs is a thank you to all the fans that have stuck with the band over the years, which considering the last few albums is the least they deserve. Introduced with a slowly grinding guitar that sounds like it fell off of the In Utero sessions, things rapidly build courtesy of a rampant drum fill from Sean Moore. It sums up outsider chic perfectly, and recalls those halcyon days of cola as hairspray and eyeliner piled up next to the Marxist manifesto.

Your Love Alone is Not Enough is a perfect pop duet, featuring Nina Persson of The Cardigans alongside James Dean Bradfield. Blatantly catchy, practically written in the style of an old Tin Pan Alley tune, it sticks out from every other song here which may well draw criticism that it was included as single fodder. But with perfect performances from Persson and Bradfield, and string parts that hark back to the Everything Must Go era it sounds like a band enjoying making music again.

Imperial Bodybags and Rendition find the band in familiar political territory again. When it came to politics, the Manics were never anything but blunt. Imperial Bodybags is no different with its images of “children wrapped in home made flags” married to an impossibly cheery riff rock ‘n’ roll riff that is equal parts The Clash and Dead Kennedys‘ Holiday In Cambodia. It’s good to see the band back on form on this front too.

Perhaps the highlight of the album is Autumnsong. It cheekily strips down the riff from Sweet Child O’ Mine, before finding itself at a bridge that is pure Queen. With finely detailed orchestration, perfect production, heartfelt lyrics and big guitar solo, it’s part ballad, and part stadium rock. It’s all the things the Manics aspired to when they were in thrall to Guns ‘n’ Roses, wanted to sell six million albums and spilt after their first record back when they’d recorded Generation Terrorists.

If Send Away The Tigers is to be the swansong from the Manics, they couldn’t have ended things in a better fashion. This is an album that re-establishes everything that was great about the band. Great rock songs, occasionally baffling lyrics steeped in references, and political polemic are all here.

The important thing is that the band sounds like they’re having fun creating music once again – it’s as if they’ve looked back on their lives and worked out what the point of it all was. If Everything Must Go was the album where Manic Street Preachers wiped the slate clean and set fire to the past, then Send Away The Tigers is the Proustian madeleine moment where they celebrate their history. This is something we’ve been waiting a long time for – a truly great Manics album.