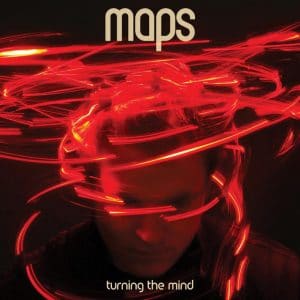 Album number two from James Chapman finds him inhabiting an entirely different world to the one he presented on Maps‘ Mercury-nominated debut We Can Create. Gone are the guitars, with Chapman preferring a more synth driven sound on Turning The Mind. Also absent is the shoegaze sound that initially defined Maps; indeed Chapman covered Ride’s epic Leave Them All Behind live on at least one occasion. Still, it’s not unusual for artists to take a step in a different direction.

The stoned fug that hung heavy over We Can Create is still present at times, most notably in the apathetic, dreamy drawl of Chapman himself. Beginning the album with the title track you’d be forgiven for thinking that Maps are occupying the same headspace that informed their debut. An opiate soaked drone, Chapman pinches Jason Pierce’s hymnal blues and craftily implies that we’re in for another album full of shoegazing triumph. However, with the introduction of loops and seething synths, it soon becomes clear that everything has changed.

Initially this is no bad thing; after all, it’s always pleasing to see an artist exploring new directions and avenues. I Dream Of Crystal is similar in tone to the title track, with the synths doing their best to emulate the essence of church organs and creating something almost holy. Yet as the song starts to edge towards its conclusion Chapman allows it to shuffle into a dead end. Repetition in some circumstances may be joy, but occasionally it can prove to be tedious. “You can’t change this way of life, you can’t change this state of mind,” hushes Chapman over and over again in what is probably supposed to be a meaningful manner.

Moving on from electro-spirituals, Chapman then dabbles in Europop. Let Go Of The Fear has the bonus of being in possession of a mighty bassline and a peculiar keyboard section that sounds as if it is being hammered out of a harpsichord by a robotic Mozart. It tries hard to sound eastern European. The Laibach-lite voices that let you know there’s going to be some kind of “cocaine fury” are perhaps meant to sound authoritarian, but wind up being about as threatening as Gruber from ‘Allo ‘Allo.

But there are some nice pop touches elsewhere. Love Will Come borrows every neat trick from the last decade’s Europop releases and concentrates them into a tune that is undeniably funky. Chapman’s brain might be thinking of the dancefloor, but you can bet his tongue was firmly in his cheek when he wrote this.

Clearly Chapman is a clever songwriter, so it’s not entirely surprising to find several moments throughout this album where you wonder whether he’s a big fan of the Pet Shop Boys. Maps appropriate their basic pop model frequently and Chapman seemingly channels the voice of Neil Tennant at will. That said, it’s all very well being clever, but you need to have tunes too.

Unfortunately all too often Chapman dwells rather than elaborates. As such many of these songs stagnate, with ideas being stretched to breaking point. The electronic nature of these new songs also provides a far colder background than perhaps they deserve and there is a lack of depth to much of this material.

Papercuts sums this album up perfectly. It starts with an empty beginning, with Chapman’s voice failing to bring about empathy from the listener before it suddenly explodes in a flurry of drums and urgent keyboards that calls to mind Sisters Of Mercy in their pomp. Then it just kind of fizzles out to nothing. It’s probably not a coincidence that there’s a song called Nothing on this album; if it were a map, there would be no contours.

So, sadly, Turning The Mind represents something of a disappointment. Hopefully Chapman will explore a new direction next time around.