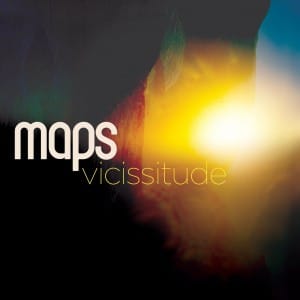 Maps’ first album We Can Create was shortlisted for the 2007 Mercury Prize. Its follow-up, 2009’s Turning The Mind, was significantly less celebrated. It probably wasn’t the best time for Maps (the recording name of musician James Chapman) to take a four-year break but that’s exactly what happened and here, finally, is Vicissitude, his third album.

We Can Create rode in the slipstream of the then-nascent shoegaze revival, drawing inspiration from both the genre’s founding fathers (Slowdive, My Bloody Valentine) and the forerunners of its most recent incarnation (M83, Ulrich Schnauss). With its general air of head-in-the-clouds wonderment, Vicissitude is still indebted to shoegaze. But all the exciting aspects of that genre – Ride’s dense guitar surges, say, or Curve’s danceability – are absent. What remains are 10 pallid tracks of kind-of dancey, kind-of psychedelic music.

A big part of the problem with Vicissitude is Chapman’s voice – a sort of whispery speak-sing that recalls The Beloved’s Jon Marsh. That’s not a problem in itself – this little corner of indie music isn’t renowned for its technically-impressive crooners – but Chapman’s music doesn’t offer enough tonal variety to distract from the limitations of his vocals.

From opener A.M.A. – whose three-letter acronym is spelled out on its dreary, stillborn chorus – through to the unforgivably mimsy closer Adjusted To The Darkness, everything here plods along at the same pace. There are no unexpected melodic detours, no barnstorming crescendos, no switches in rhythm – nothing, in short, to jolt the record out of its slumberous rut.

Repetition is a key part of Maps’ music. In the right hands, repetition can, of course, be hypnotic but on Vicissitude, it’s tedious. One spends the back half of the six-minute Nicholas waiting desperately for the track to be put out of its misery as Chapman repeats the three-note non-hook over and over again; the gradual swelling wash of synths that surrounds it isn’t texturally rich enough to achieve lift-off. Elsewhere, tracks vegetate when they should blaze a trail into the sky; for its final minute, I Heard Them Say’s flat-footed rhythm is left hopelessly exposed as Chapman’s vocals disappear to be replaced by some pedestrian synthesizer vamping.

We Can Create was far from perfect but at least its highlights (To The Sky, Lost My Soul) featured decent hooks and swoonsome arrangements. But Vicissitude is such a wispy, bloodless record that it’s hard to find anything to recommend about it.