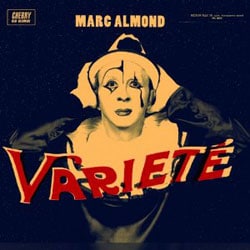 Since he first exploded into public consciousness in the early 1980s with Soft Cell, Marc Almond has always navigated his own singular path.� Undeniably pop on the one hand (the Number 1 singles, the features in Smash Hits, the adoring teenage fans), his music has always, nevertheless, at the same time had a wonderful feel of the genuine outsider, the decadent, troubled, misunderstood underdog.

It has been a long and turbulent career, featuring lows like breakups, breakdowns, drug problems and a near-fatal motorbike accident in 2004, alongside the many highs and successes.� Varieté, his latest album, arrives with claims it’s his swansong, as he bows out of the limelight – one last opportunity to exorcise some of those demons that have haunted him, one last outing for his particular voice and world view.

Clocking in at 16 tracks, this is a broad and largely autobiographical work.� On first person tracks like Bread and Circus he tells us – in a wonderfully British but questionably accurate way – “I don’t need no ostentatious bling / Just slice of bread and butter and a song to sing”.� Elsewhere he uses a beautiful ballet-based analogy of his “Nijinsky Heart”.� Almond often sings about a “he” or, most often “you” that nevertheless clearly still means him.� The Exhibitionist’s “fabulous monster in a sideshow of excess”, for example, or the character in Sandboy who “never showed your pain”.� The best summation of his outlook and attitude is probably this same song’s repeated assertions that “Weird is wild and cute is bland” and “Ordinary is bad, strange is good”.

Trials of Eyeliner takes us on a long journey with Almond from adolescence to adulthood, the make up seemingly the one constant “from teen to glam to punk and then / The disco age”.� This wonderful track captures Almond’s mix of vulnerability, decadence and isolation as well as anything he has done in the past.� Make up is referenced again in Lavendar: “Maybelline / In shades of green” and yesterday’s smudged khol; and in Cabaret Clown where greasepaint is used “to cover the tears”.� Clowns too are a theme, featuring again on Bread and Circus.

Probably the most compelling and moving moment is But Not Today.� The song seems to be exploring an alternate future where Almond died, perhaps in the motorbike accident, perhaps by suicide, and gives an uplifting take on a survivor’s longevity.� The louche and witty It’s All Going On is marvellous too, drawing analogies between his life and a “drag queen’s dressing room” or a “prostitute’s bed”, to a perky doo-wop backing.

Many songs have a cabaret, vaudeville feel to them – Bread and Circus, Varieté, Sin Song in particular.� Trials of Eyeliner and Swan Song are flat out torch songs, all jaded emotion and hearts on sleeve.� Almond doesn’t shy away from (deliberate?) use of the occasional lyrical cliché, imploring “send in the clowns to entertain us”, on Bread and Circus.� Jaunty numbers like Intro, It’s All Going On and Varieté sit alongside slow, grave and often melodramatic pieces.

Almond’s vocal is as bruised, compelling and imperfect as always; at its best when slightly off-key, as on Unloveable and Sin Song.� By the time he takes his extended curtain call, signing off with two elegiac closing tracks – Swan Song (“Here’s where it ends… I no longer belong”) and the protracted Sin Song (“the last song I’ll ever sing”) it is clear just what a treasurable artist he is.� His honesty, his wit, his embellished yet still frank and forthright portrayal of life as art will be hard to replace.� This is a unique and distinctive voice and one that it would be a great shame if we no longer heard.