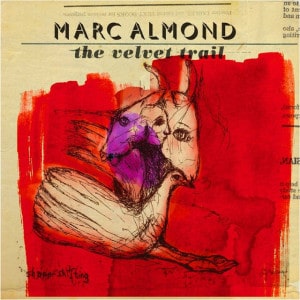 One listen to The Velvet Trail confirms the creative spirit still burns deep within Marc Almond, despite his strong hint that the Varieté album of five years ago might be the last to feature his own songwriting.

Enter Chris Braide, whose music and production feature on records by Paloma Faith, Lana Del Rey and Sia. Given the prowess of those three very different female singers, it isn’t such a big step to imagine the suitability of Braide’s writing for Marc Almond’s voice – and as soon as the former Soft Cell singer saw the potential he had the words at his disposal.

Yet The Velvet Trail is the epitome of a modern collaboration between lyricist and composer, for Almond and Braide did not meet in person until the record was finished – and that arguably prevents it from being an ultimately human experience.

However this is a strong collaboration, a set of meaningful songs that have clearly touched Almond to the core. There is a lot of hurt here, right from the start, where he sings, “You did something bad to me, and now I’m meant to forgive you”. Immediately this casts a vengeful shadow over the album, a method of release from what seems to be considerable emotional torment, helped by Braide’s bold and glamorous settings.

Zipped Black Leather Jacket is classic Almond, an imperious vocal over shiny orchestration. The voice sounds terrific, though the production is just a touch too slick at times. In these ‘up’ songs he delivers effortlessly, and Pleasure’s Wherever You Are is exotic cabaret, with its geisha girls. The Pain Of Never is the album’s emotional centre, its best song where the singer feels “the pain of never, all the time”. Demon Lover runs it close, mind, and a chance for Almond to really let himself go on a trouser-tightening falsetto that he nails faultlessly, gliding up to the top notes before effortlessly swooping back down. This signals a particularly uplifting part of the album that climaxes with When The Comet Comes, a duet with Beth Ditto that struts confidently onto the dancefloor.

To join the album cohesively there are four instrumentals, dividing the record into quarters. It is an effective device, borne of Almond’s frustration at short listener attention spans, and it works well, closing with a gorgeous, reflective cello solo.

There are strong hints of a musical in the waltz that is Life In My Own Way, while Scar is surely referring to the singer’s motorbike accident and illnesses. While there is clearly some cathartic work going on here the rhythms in particular can be too clinical and processed, creating a tension against the expansive orchestral arrangements that in sound too rigid and processed.

Yet this is nonetheless a strong and often stirring album, and the voice sounds fantastic. As one of Britain’s most distinctive singers, it is heartening indeed to report Marc Almond in such rude health.