Marc et Claude – You Own The Sound 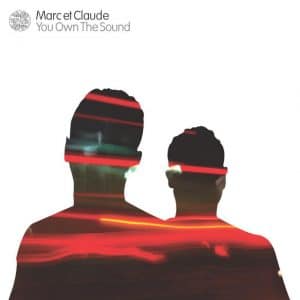 On the face of it Marc et Claude would appear to have missed the boat. Trance music’s heyday commercially was surely in 1999, with the likes of ATB, Paul Van Dyk and Ferry Corsten coining it in from summer single hits, whilst the Ministry, Cream, Euphoria and Gatecrasher claimed the compilation market.

Marc Romboy and Klaus Derichs, the two behind this project, were in on the act with their Alphabet City label, breaking through with the singles La and I Need Your Lovin’. The latter was a big hit in the UK, registering high on the cheese scale at the same time.

All of which makes me wonder if You Own The Sound is four years too late, compiling as it does a selection of Marc et Claude tracks from as early as 1997. Initial impressions aren’t good, with the breathy intro The Sound and weaker single Tremble, whose main hook is not really memorable enough. Stick with it though, as the duo crank things up a bit with Free Spirit and the excellent La, before a version ofI Need Your Lovin’ that wisely majors on the excellent trance riff rather than the vocal.

There’s a creditable stab at post-Moby chill out blues (Laserbeam Butterfly) which gives the record some welcome variety, with a good vocal from none other than Moped John. Cape Town is also an excellent downtempo track, brooding and atmospheric. This leads into the nippy Feel You, a Tony Hadley collaboration that is musically sound – a driving trance track – but lyrically inane, despite its suggestiveness (“so hard I’m on fire!”)

Loving You ’03, the current single, works better in radio edit (ie. shorter!) butThe History Of Acid House is the pick of the album, a robotic floor filler. There’s a sense of deja-vu as the album closes with a longer version of The Sound – much better this time – and the Riva remix ofTremble.

An inconsistent collection then, and too long at 78 minutes – the CD programmer will be useful here. But this is by no means formulaic trance, and is well worth hearing in places. Whether the genre will regain the dizzy heights of 1999 is another matter, but this is still infinitely better than the likes of DJ Sammy of Flip & Fill. Let’s face it, what wouldn’t be?!