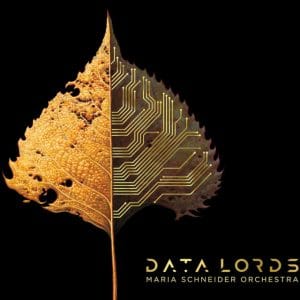 Driven by her impassioned and steadfast commitment to copyright and artists’ rights, Maria Schneider’s substantial double set Data Lords dissects the impact of big data and the corporate internet on our creative lives, and contrasts it with the wonder and beauty of the natural world. This proves to be a rich and multifaceted theme for exploration in large scale orchestral jazz arrangements, and Schneider’s music and the improvised contributions of her band members perfectly express her ideas and feelings.

Having collaborated with David Bowie on the arrangement of Sue (Or In A Season Of Crime) that appears on the Nothing Has Changed compilation (and with members of her orchestra subsequently featuring in the band that recorded Blackstar), Schneider has pursued a darker, more turbulent dynamic in her music here, although never quite completely eschewing the pastoral and evocative beauty that characterised her previous masterpiece (2016’s The Thompson Fields).

Much of the first disc strikes a decidedly ominous and apocalyptic tone. The opening A World Lost, ushered in on delicately menacing piano chords that sound not entirely unlike the opening of Kate Bush’s Snowflake, mourns the apparent loss of real human connection as a result of our collective preoccupation with digital communication. The textures of Johnathan Blake’s drums (initially played with mallets) and Ben Monder’s brooding guitar solo gradually enhance the creeping tension. The magnificent title track, commissioned by the Library of Congress Da Capo fund, muses on the threat posed by the point of singularity (where computers possess greater intelligence than humans and where AI might potentially turn against us) with unsettling effect. This is Schneider’s orchestra at its wildest and most intense, with plenty of sparring between rhythm section and soloists.

Don’t Be Evil, named in honour of Google’s original mission statement (something which Schneider views as ‘setting the bar incredibly low’) has a strong narrative, moving from mischievous staccato provocation to sinister warning. Ben Monder’s brilliant, excoriating guitar solo ratchets the intensity. This is ingenious orchestral writing, rich in detail and imagination even as it castigates corporations for diminishing our capacity to create.

Fortunately, Schneider’s assessment of the impact of digital advances, while pessimistic, is not without nuance. The story behind CQ CQ, Is Anybody There? is delightful and touching, with Schneider exploring morse code as a precursor to digital communication, and her father’s role as a ham radio operator. Schneider eventually sourced his call card through a dedicated collector via a website. Schneider utilises morse code for the phrasing in the music, and the dissonance created through the electronic enhancements to Greg Gisbert’s trumpet solo is playful. Schneider explores a widescreen, cinematic vista on Sputnik, contrasting the initial awe of the space race with today’s competition for surveillance capabilities. It’s a beautiful piece, with gentle flutterings hovering above rich harmonies.

The second disc, entitled Our Natural World, emphasises the wondrous over the threatening. Schneider is capable of breathtaking beauty as a writer – unafraid of exploring direct melodic communication and stirring arrangements. There is also plenty of subtlety and nuance in her writing, so this communicates honesty and sincerity more than earnestness. Sanzenin achieves an apposite serenity in celebrating the Buddhist temple and garden located in Ohara, Japan. Gary Versace’s accordion provides an intriguing, unusual and playfully agile lead line. Inspired by the work of wood fired potter Jack Troy, Stone Song is intricate and mobile, Steve Wilson’s soprano engaging in a dance alongside the rhythm section, and with compelling accuracy in rhythmic placement. On the concise Braided Together and the longer The Sun Waited For Me, both stunning and beautiful, Schneider is once again inspired by the work of poet Ted Kooser (Schneider based her Winter Moonlight Walks on a set of Kooser’s poems).

Two substantial compositions in the second half evoke real joy and wonder with Look Up indeed matching its title with a feeling of ascension and aspiration. Bluebird might be the most directly melodic piece here, full of strong motifs and lines that linger in the memory, exploring the profound genius of migration in nature. It also has an exhilaration range of textures and accompanying devices during the solos. Schneider even acknowledges the positive role of the internet here, as the images and information uploaded by enthusiasts can be used to track global patters and aid conservation. In the end, as righteous and angry as Schneider’s defence of artists’ rights and natural creativity undoubtedly is, Data Lords recognises the positive impact technology can have. It is down to all of us to try and secure a healthy balance that benefits us rather than threatens us. For all of Schneider’s darker adventures here, the album concludes with warmth and empathy.