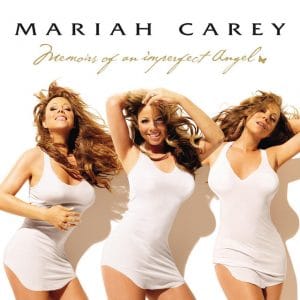 The release of Mariah Carey’s 12th studio album comes at an interesting point for the big-voiced diva fraternity. Not only has 2009 seen the improbable return of Whitney Houston, whose much-publicised personal problems are only evident on I Look To You via the huskiness of her voice rather than the lyrical content, there’s also the imminent arrival of Leona Lewis’ second album, Echo, due out in the UK on the same day as Carey’s.

Styled to recall Carey’s youthful exuberance of during her early ’90s peak, Lewis still has that air of innocence and a voice that can seemingly mirror the octaves of a piano. Can Mariah Carey still compete with the glut of acts that have made a career out of copying her style?

Memoirs Of An Imperfect Angel seems to suggest not. The Mariah Carey of 2009 is a far cry from the version that dominated the pop scene nearly 15 years ago with sky-scraping ballads and sleek, harmless R&B hybrids. Following a mid-career slump that saw her sign a multi-million pound deal with Virgin only to be dropped after one album (the disastrous Glitter soundtrack), Carey rose Phoenix-like from the ashes of her career with the confident The Emancipation Of Mimi album. Featuring production from The Neptunes, Kanye West and Jermaine Dupri, it went on to sell over 10 million copies and put Carey back at the top of the pile.

Unfortunately, Memoirs sees Carey slip back into default mode, trying to breathe life into a set of fairly listless, mid-paced R&B jams. It’s telling that Carey’s biggest single in recent years is 2005’s We Belong Together, a lovelorn tale of heartbreak wrapped inside a polished mix of simple, finger-click beats and piano riffs. Much of Memoirs aims to recreate it, with producers Tricky Stewart and The-Dream (Rihanna, Beyoncé) adding very little to the template.

Tracks like Inseparable and Candy Bling are little more than musical skeletons, with Carey talk-singing over the top of a sparse beat. In fact, Carey’s voice sounds strained, reduced to a strange whisper or a hushed coo, or, as on the ridiculous cover of Foreigner‘s I Want To Know What Love Is, struggling to repeat the vocal gymnastics of old. The latter is a shame because the song starts relatively restrained and Carey sounds genuinely emotional, but all that is lost after the arrival of a choir and one of the most OTT key changes in recorded history.

At least the inclusion of the cover version helps break up the monotony of much of the album. Gone are the upbeat, carefree singalongs such as Fantasy or Honey, and instead we’re left with the cloying The Impossible, an ode to her new husband, or the girl-group pastiche It’s A Wrap. Angels Cry is a limp ballad and the most obvious attempt to recreate the success of her Mimi reincarnation, which ultimately ends up making you want to hear the original version more than anything.

There are flashes of brilliance on Memoirs, not least the first single Obsessed. Allegedly written to torment Eminem after a disputed affair, it features the brilliantly baffling line, “see right through you like you’re bathing in Windex”, and a clipped beat a la Dr Dre. H.A.T.E.U. manages to balance its simplicity with a sense of urgency, whilst the fun Up Out Of My Face finds Carey confronting a hapless man with confusing fake nail-based metaphors (“Not even a nail technician / with a whole lotta gel and acrylic / can fix this”).

Unfortunately, such moments are fleeting and too much of Memoirs is indistinguishable not only from former singles but from the other songs on the album. Listening to it can feel like a bit of a chore, and despite Carey’s current happily married state, much of the lyrical content is mired in angry break-up clichés. Though it’s commendable to stick with one set of producers to give a sense of cohesion, Memoirs could have done with some variation. Our advice? Next time, get out the jewel-encrusted Blackberry and give Kanye West or Pharrell Williams a call, and mix it up a bit.