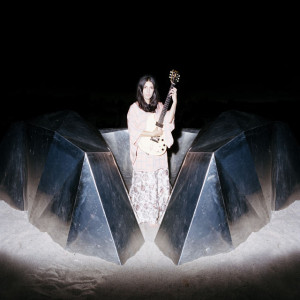 Wildbirds & Peacedrums chanteuse Mariam Wallentin embarks upon a brief musical vacation from stick-wielding husband Andreas Werliin (though they have announced a new record together due out “in the Spring”), to tumble down a rabbit hole where ’60s folk-pop, Cat Power and fantastical spirits commingle. The Swedish singer’s solo jaunt revels in Palahniuk-ian existential debates and harmonic alchemy rather than the pure rhythmic revolution of her day job.

Blood Donation, the debut LP from Wallentin, still leans heavily on her vocal stylings – be that Florence-esque banshee howls or the soft murmur of jazzy crooning, or anything in between – but we see instrumentation take centre stage here and there at odd moments, which allows for a wonderfully contrasting timbre. First Haiku, for example, sees Wallentin’s pipes almost possessed, soaring and leaping all over the shop and occasionally tripping into silence as saxophones and dream drones take the reins.

On Hole Patterns (and, indeed, Blood Patterns), we see Wallentin channel Zola Jesus above pitch-black ’80s synths – it’s a brief cut, lasting only 53 seconds, but Jesus’ unmistakeable operatics are felt. The chilled-out lounge vibe of All There Is And More fizzles against sparse The xx axes and Disney-fied clarinets; you might not expect all those elements to slot so neatly, but the result is astonishing. Wallentin proves, via woodwind and modern strings, that her appeal isn’t reserved to just her dulcet tones – her compositions are insightful dissections of pop, jazz and folk.

The delightfully macabre Dead Meat slinks and swoons as if it were the backing track to gothic dancers at the Moulin Rouge some 70 years ago. Though there’s a coy charm bursting through, don’t be fooled, as a gory streak courses through Wallentin’s veins: “The impact of bleeding in a nest made out of barbed wire fence/ and the rain which to pierce both heart and sense.” Kate Bush seems to be a point of reference here, with the theatrics and oomph reminiscent of Babooshka’s gusto.

The blunt, violent fascination with death isn’t limited to Dead Meat – “And to a hole, we will be sucked back in/ hitting rocks of gold, make space/ so after death we keep no pace,” Wallentin chimes on The String Of Everything. Alice Gold, or perhaps even Lissie, are akin to the country-pop backing noise, but unlike the aforementioned, Wallentin focuses on the trajectory of life rather than the microcosm of relationships. The title track is also viewed through the lens of mortality (though it’s not really the focus): “To be alive, or to be kept alive/ loud, almost aggressive/ or carefully crawling inside.”

This spotlight on death and repeated lyrical motifs surrounding “crawling inside” point towards a darker realm for Wallentin. The largest segment of this record is an existential discussion. She fears dying and all its guises, and is determined to make something more of the infinitesimal time alive. On the title track, she’s not letting anyone waste her shot at happiness, even if she loves them. On The String Of Everything, she wants to succeed and transcend her mortal coil. On All This And More, she questions the point of life.

Oddly, running parallel to these complex themes, is an uplifting deluge. Perhaps it’s the weaving hooks, pop bent and vintage folk dabbling. Though Wallentin is discussing high-calibre philosophical topics, she’s not ready to give in, not by a long shot. Blood Donation is a statement of steadfast intent and hope in the face of certain doom. In many ways, it’s a distant cousin of The Life Of Brian‘s Always Look On The Bright Side Of Life.

Mariam The Believer MP3s or CDs

Mariam The Believer on Spotify