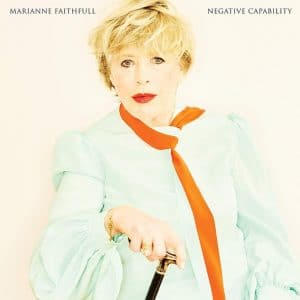 Released 39 years ago today – 2nd November – an album called Broken English smashed down the boundaries of where women stood in the post-punk era. Not girls, women.

Marianne Faithfull was 32 years old when she released Broken English, and had already lived 10 lifetimes. She had been all over the world, the darling of Mick Jagger – the greatest, biggest rockstar of all time, even then – and had fallen foul of the saturnine charms of heroin in a way that had eluded her beau. He had remained, as always, aloof from the allure of addiction. Faithfull had not.

Broken English was her wail against the world. Her reckoning. She spoke out, in a post-punk era, an era completely dominated by men and girls. She spoke out about her pain, her suffering. Her record still remains a monolith of self-actualisation, self-empowerment and self-loathing. It remains one of the greatest albums of all time, and offers an alternative view to the youthful misery of Joy Division‘s Unknown Pleasures, the stylish urbane bleakness of Iggy Pop‘s David Bowie-assisted The Idiot and the sexy stench of Grace Jones‘ Nightclubbing. It stands, still, completely alone.

The reason that Broken English is important here, despite the coincidental release date, despite the contextual analysis, is that Faithfull’s new record, Negative Capability, contains a new recording of the most powerful song from that record: Witches Song. This gleefully bleak and unwildly new version is, in many ways, a completely different song. Faithfull’s voice, which sounded older than her years some 40 years ago, is here more ragged and grating than ever. Her instrument has aged with her like a fine wine, like Iggy Pop, or like Mr Jagger himself. It’s completely her, completely unique.

For this album, Faithfull has called on the creative talents of previous collaborators Nick Cave and Warren Ellis (the latter of whom co-produces), Mark Lanegan and Ed Harcourt. These are all excellent choices for this album, and all sing from the same hymn sheet in terms of songwriting. Lanegan and Harcourt are very much in Cave’s vein – the broken, Captain Beefheart-via-Tom Waits brimstone sermons, the Bob Dylan-via-Leonard Cohen confessionals – fired by bleak emotions (in Lanegan’s case) and lifted by Zen-like clarity (Harcourt’s). (Maybe on the next album, her managers could call Hamilton Leithauser, PJ Harvey and The National for some sessions?)

The first single The Gypsy Fairie Queen – inspired by Shakespeare’s A Midsummer Night’s Dream – was co-written with Cave, and he plays piano and adds his delicious baritone to the mix. It’s pretty, powerful, and an essential sequel to their 2014 collaboration, Late Victorian Holocaust.

The record was mostly recorded at La Frette Studios, Paris – Faithfull’s adopted hometown, which appears again on They Come At Night. Hades himself, in the form of Lanegan, supplies the music for They Come At Night, inspired by the attacks in Paris (“Those who survived that night are still completely traumatised/But the other souls unlucky/Shot like dogs between the eyes”). There’s added poignancy when you realise that Lanegan is close friends with a few of the Eagles Of Death Metal, the band on stage during the attack. Faithfull transforms the message from personal to universal here, with her rough-edged, raw interpretation.

Dylan’s It’s All Over Now, Baby Blue – the most sincere of heartbreak anthems – takes on an extra layer of darkness when interpreted by Faithfull. She has that ability to infuse songs with her own context, with her own story, and she’s a natural at reinterpreting Dylan. There’s a rerecording of As Tears Go By – her first hit – which only adds to the sense of poignancy in the whole project. It feels as though it’s something she had to make, some statement that she simply could not go on without making. And it works. Of course it works. Album closer No Moon In Paris, featuring Harcourt, is another highlight; its potent lyrics reflect on her incredible life and career.

In the press release, there are mentions of the late-career classics of Cohen and Johnny Cash, and these references are apt. We are now in the post-rock age, where the original fire is all but extinguished, and icons like Faithfull are needed to carry the last embers of the original rock age to its final resting place.