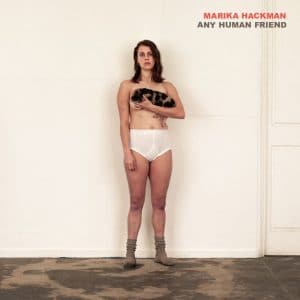 Marika Hackman has changed somewhat since she first appeared in 2012. Her debut album, full of atmospheric, almost ghostly, folk was compared to Laura Marling, while the follow-up I’m Not Your Man was the polar opposite – big, swaggering indie-rock with long-term friends The Big Moon acting as Hackman’s backing band.

And now we have Any Human Friend, which is yet another evolution for Hackman. It may start hushed and folkie with opening track Interlude, but it soon spirals off into another direction to become Hackman’s best record to date. Earlier this year, Hackman’s former partner Amber Bain released her debut album under the name The Japanese House, which was a thinly disguised dissection of their relationship. Any Human Friend works well as the answer record – we’ve come a long way from Eamon and Frankee…

So, Any Human Friend is a confident, sweary and refreshingly frank look into the love life of a young, gay woman in 2019. If a song entitled Hand Solo didn’t give away the fact that there’s an awful lot of sex being sung about here, then All Night, with lyrics like “our mouths are just for moaning, kissing and fucking….we go down on one another, you’re my favourite kind of lover” makes everything clear.

It’s also Hackman’s poppiest, catchiest album yet – there are choruses on Any Human Friend that bury their way into the brain and refuse to leave. The One is an early highlight – self-lacerating lyrics (“love me more, I need to be adored” is met by the joyously yelled backing vocal of “you’re such an attention whore!”) married to a gorgeously slinky melody. Come Undone, all about infidelity, pulls a similar trick, ensuring you’ll be singing “And I think that I love her, but I’m fucking another” at all manner of inappropriate occasions.

There’s also an intriguing move towards a more synth-based sound: Send My Love has that cool, keyboard-driven sound reminiscent of Cliff Martinez‘s Drive soundtrack, while the desperately sad Hold On, towards the end of the album, nods to Massive Attack‘s darker moments. It’s the latter which is one of the record’s more affecting moments, where the pressures of a break-up come to the fore: “hold on, I wanna be a newborn” sighs Hackman at one point.

As befits its self-confident attitude, there’s barely a weak track on the album, and once the final notes of the title track finish, you’ll want to go straight back to the start to hear Wanderlust again. At times, it’s so honest that you may feel like you’re prying into someone’s diary, but it will be a major surprise if this funny, clever, heartbreaking record isn’t nestling at the top of the Album Of The Year polls come December.