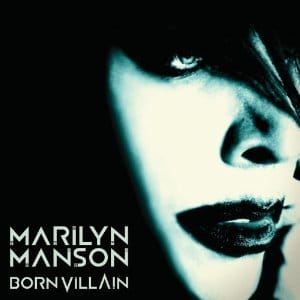 Hey, cruel world. He’s back – rock’s prince of darkness returned for another round, still standing, still fighting. “Suicide death metal,” Marilyn Manson brands his latest collection of brooding delights. But beyond the self-categorising, we have to ask what more he can offer to us that has not already been offered. Indeed, Manson’s last few albums – while acceptably proficient – felt like they were beginning to settle into a predictable rhythm of safeness. And if there’s one thing that Marilyn Manson should never be, it’s safe.

As he attests with characteristic lewdness here, “We’ve got fucking fate!” – there’s always been that sense that some kind of dark Providence has been watching over Manson, guiding him with a malevolent hand through the courses of the industry, letting him rise and fall with chaotic whim. But with Born Villain, we see his star very much in the ascendance again; a heavier, darker incarnation for a new decade. The result is deliriously pleasurable.

Across the album, Manson finds his inner poet in fine fettle. Tracks like Overneath The Path of Misery rebound with a sense of rhythm and lyrical posture that befits an artist of Manson’s decadence. Eight albums in, Manson clearly hasn’t exhausted his bag of tricks – Greek myths, the Golden Ratio and the Bible are all embraced into his oeuvre, pinned between chunky riffs and broad, throaty choruses. And even if Born Villain feels at times like a hefty meal to get through, it consistently offers something new, some interesting quirk or other to sink the teeth into. Like fine steak, Born Villain is at its best raw and bloody.

If there’s one theme that dominates across the album with ardent prominence, it’s sex. Manson takes a playful turn early on in Pistol Whipped: “You’re a little pistol… and I’m fucking pistol whipped… so cock it.” Amidst screeching, masochistic feedback, his sense of innuendo and the tensile powers of sonic manipulation combine in teasing union. “Wanna fight, wanna fuck, wanna die, try your luck” goes the party line in Lay Die Your Goddamn Arms, and you believe it – this is the rockstar Manson burning away with all the vigour of his youth returned to him. Early stand-out No Reflection is lithely agile, pulsing away with chords that seem to resonate with this vigour in the most purest of senses. It doesn’t just sound good, it feels good – and amidst a record that is all about the limits of physical sensation, No Reflection opens the gates to a world of orgiastic possibility.

But beyond the sex, there’s also vanity. The record’s bonus track – a staid cover of Carly Simon’s ’70s classic You’re So Vain – might be ill-judged, but its message holds true across the album. Every aspect of Born Villain, right down to its aggrandising title, holds Manson up on a pedestal, and it’s testament to his skill that he makes the look work. Rekindled to the height of his powers, the album’s title track is frighteningly good; recalling Songs Of Faith And Devotion era Depeche Mode, all bluesy licks and dirty, spitting vocals. Manson descends into moans of ecstacy-imbued passion, engorged on the sense that Born Villain feels ‘just right’. There’s a sense of letting loose, slipping free of all holds to record something that isn’t only of clear high quality, but that’s intensely enjoyable too. And Marilyn Manson when he’s enjoying himself is quite the force to be reckoned with.