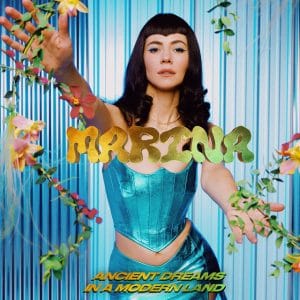 In 2010, back when she had her Diamonds, Marina established herself as one of our most singular pop artists. Idiosyncratic, full of personality and bursting with a bulging full bag of odd pop tricks, Marina stood out a mile from any number of electro pop revivalists around at the time.

Marina thought about things a little deeper than others and was determined to follow her own winding path to pop success. That path hasn’t always been smooth but, nevertheless, here we are more than a decade later and Marina retains a place at the top of pop’s tree with a hugely devoted following who will savour her fifth album Ancient Dreams In A Modern Land.

This time Marina states her case with a clarity of thought sharper than before. There’s no room for mystery here. Marina has a lot to say and she’s going to say it as loudly and boldly as she can. Concise and defined, the 10 tracks here distill Marina’s thoughts on modern day society and all its horrors into a short, sharp shock.

The title track bursts in on a banging disco glam beat driven by Marina’s strident vocals. “You are not here to conform,” she sings, instead positioning herself as “the eye of the storm”. It’s a strong opening statement that’s more swirling dread than the hedonistic pleasure seeking that can be found on some of the most successful pop records of recent years from Harry Styles and Dua Lipa.

Ancient Dreams deals with big issues that run through almost all of the songs, with Marina taking on social injustice, climate change, racism and misogyny. These tales are varied in their success. Purge The Poison sounds like a headlong pop rush of obvious surface level references where some deeper introspection might have been better. Far better is the perceptive and evocative Man’s World in which Marina aligns her message to a glorious swooning melody. She brings her A-game to the ballads, and this record contains her finest tender work as best exemplified on the stunning closer Goodbye, a reminder that Marina can touch levels few others can get near.

If there’s anything the album lacks though it’s some of the knowing playfulness of her previous work. It seems to be missing a slight spark that made Marina such a fun breath of fresh pop air. Maybe that’s the point though. These aren’t fun times, and Marina is here to deliver harsh truths.