Marina And The Diamonds – Electra Heart 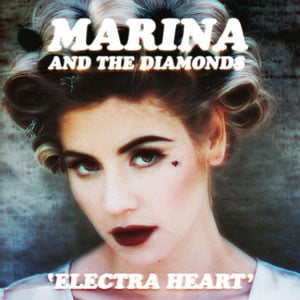 It’s been two short years since Marina Diamandis released her debut album, The Family Jewels, and in that time a lot’s changed on Planet Pop. The girl-pop market’s moved onwards and upwards, with Adele taking her place at the top of the table, Lady Gaga‘s Born This Way sealing her place as its precocious cheerleader and Lana Del Rey elbowing Diamandis aside to claim her spot as ‘the kooky one’. So it’s a credit to her that, rather than sulking and coming back with a similar album that, in the shadow of Del Rey’s Born To Die, could have sounded dated, she’s decided to sock a punch, rip up her own rule book and completely reinvent herself.

This new Marina And The Diamonds ditches her artsy image and the big, theatrical songs that dominated The Family Jewels for something that she describes as “the antithesis of everything I’ve done so far”. Its follow up is something of a concept album, which sees her adopt an alter-ego (or, as she puts it, “a vehicle to portray the American dream”), Electra Heart, to play a series of female roles and take a sideways snipe at the very girls who’ve barged their way past her.

It starts with a bang. Bubblegum Bitch channels sophisticated flecks of Swedish pop with brassy, Katy Perry-ish cheek. “Ms sugar pink, licka licka lick”, she chants, sounding every inch the heavily made-up prom queen who pouts from her album cover. She continues in this vein with songs that, she claims, scrutinise female identity and stereotypes. One of the best, Homewrecker, slaps spoken word warnings about matters of the heart (“Every boyfriend is the one until otherwise proven…and love it never happens like you think it really should”) over a vengeful, anthemic track that’s sure to mop a thousand teenage girls’ tears. Teen Idle sees a fleeting return of the voice that made The Family Jewels; a whispy Kate Bush purr delivers the killer line “I wish I’d been a prom queen fighting for the title, instead of being 16 and burning up the bible, feeling super super suicidal” with something verging on menace.

Single Primadonna is a brilliant air-punching track that looks to Perry and Gaga for inspiration. But if she’s trying to make a statement about them, she fails. The lyrics lack the caustic charm of some of the album’s better tracks, and Primadonna would actually slot very easily into one of their albums. This is where her concept comes unstuck. Tracks like Bubblegum Bitch make loud, bold, clever statements, but much of the album is the usual fodder – breakups, lost love – and fails to maintain the pace its brighter moments set. This, coupled with the fact that she’s brought on board some of the writers who carved hits for the likes of Perry and Britney Spears, sinks what initially seemed like a clever idea.

There are some strong singles which are bound to bounce around throughout the summer, but what comes next will be interesting; with her debut album she showed she can do credible ballads and quirky pop, and Electra Heart showcases glimpses of a clever, ballsy pop star. But which will she settle on?