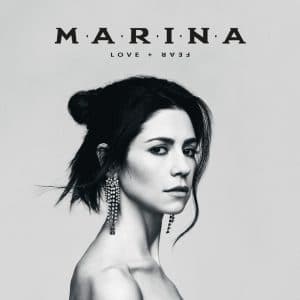 Four years ago, Marina Diamandis draw a veil over the first decade of her career with her last album credited to Marina & The Diamonds, Froot. It was a funny sort of record, uneven at times, recorded with just one collaborator (The Bird & The Bee‘s Greg Kurstin), and although it had some beautifully crafted pop songs on it, there was also a whole load of filler.

Love + Fear marks Marina’s new direction – this is the first album in which she’s credited without The Diamonds, although in reality that’s not too much of a radical departure. For Diamandis has always been a solo artist, and Love + Fear in effect marks a return to the multiple producers, dark piano ballads and big bright shiny pop songs.

This is, though, yet another funny sort of record. It’s billed as a double album, with one side dedicated to ‘Love’ and the other side dedicated to (yes, you guessed it), ‘Fear’. And as there’s a lot to be fearful and anxious about in today’s world, it seems a good idea to balance it out. Unfortunately, Love + Fear is, again, pretty uneven – it runs for just under an hour, and could badly do with some judicious editing.

Baby, for example, is a weird choice for inclusion. The collaboration with Clean Bandit and Luis Fonsi was released last year, has already appeared on the Clean Bandit album and is, to be honest, one of those formulaic, annoying, tropical-flavoured pop songs that were so popular in the wake of Fonsi’s Despacito.

However, there’s a bit more substance to the rest of the ‘Love’ side. Enjoy Your Life is an enjoyable tribute to peak-’80s Madonna, and Orange Trees is a nostalgic look at the Greek island where her family is from and has a suitably summery chorus. This all pales in comparison to the excellent To Be Human though – although it’s produced by sometime Lorde and Taylor Swift collaborator Joel Little, it has all the hallmarks of classic Marina: built on a downtempo piano riff, it soon builds up into a big sweeping epic that Florence Welch would be proud of.

The ‘Fear’ side is arguably the more interesting and experimental of the records. There’s a touch of Rhye to the vocal distortions and synth effects on Believe In Love, while the orchestral string section on Life Is Strange mask a message of disillusion and inertia – “don’t know what I’m doing with my life, all I know is life is strange” – that many will identify with.

For such a bulky release though, much of Love + Fear feels oddly insubstantial. There are too many songs that never really go anywhere, and for an album that’s meant to address some pretty weighty issues (To Be Human mentions Vladimir Putin and references Hiroshima), there’s no indication of what Marina’s message actually is. As ever with Diamandis, there’s some decent pop music here, but it seems like we’re still waiting for her to produce that genuine killer album, Diamonds or no Diamonds.